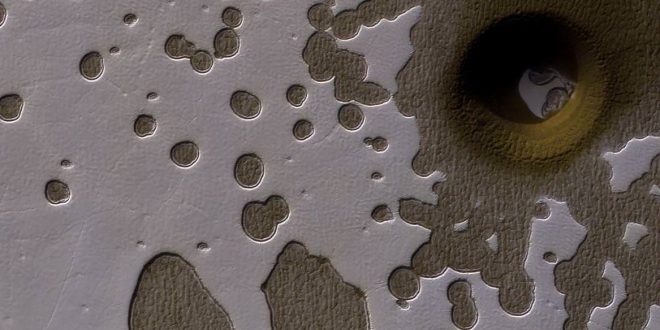 Researchers have no idea what made this huge hole on Mars

Researchers have no idea what made this huge hole on Mars

The Red Planet can truly amaze people of the many mysteries it holds. Recently, a photo of a massive and deep hole on Mars has made scientists puzzled.

But at upper right is a deeper pit that goes through the ice and dust, which NASA says could be an impact crater or some sort of collapse pit.

The picture was taken in the southern hemisphere of Mars late in the summer and unveiled Friday (June 2). At the time the image was taken, the sun was low in the Martian sky and the shadows it cast allowed for more “subtle” topography to show in the image, NASA officials.

MRO takes detailed pictures of the surface using the University of Arizona’s High Resolution Imaging Science Experiment (HiRISE) camera. The spacecraft launched in 2005 and has been orbiting Mars since 2006.

Web articles – via partners/network co-ordinators. This website and its contents are the exclusive property of ANGA Media Corporation . We appreciate your feedback and respond to every request. Please fill in the form or send us email to: [email protected]
Previous: Researchers discover hottest giant exoplanet ever observed
Next: New maps show possible extent of flooding from Okanagan Lake, Report