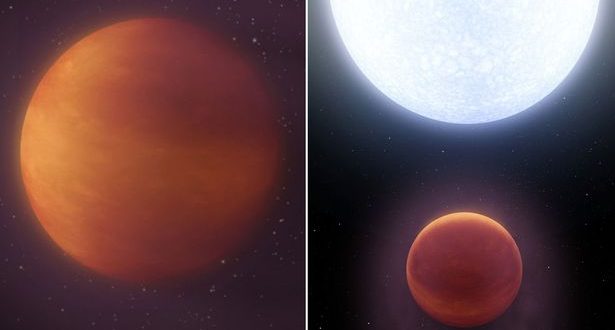 In May 2016, astronomers at the Winer Observatory in Arizona were observing the sky using the Kilodegree Extremely Little Teloscope (KELT), which allows them to look at many stars at once, at a low resolution. They noticed that a star named KELT-9 would dim slightly every 1.5 days.

Further investigation led to the discovery of KELT-9b: an exoplanet that completes a circuit of KELT-9 every 1.5 days. It stood out from previous discoveries. According to Scott Gaudi, astronomy professor at the Ohio State University in Columbus who has led a study on this topic, it is the “hottest gas giant planet that has ever been discovered”.

The temperature on KELT-9b is 4600 Kelvin. To put this in perspective, it is only 1200 K cooler than the surface of our Sun, and three times as hot as volcano lava. The heat is due to extreme radiation that is projected onto the planet from its very bright host star KELT-9. Due to the nature of the planet’s orbit, only one face receives the ultraviolet blast, while the other side remains in darkness. The star-facing side of the planet is constantly exposed to radiation, making it exceptionally hot but also putting it at risk of evaporating away.

Web articles – via partners/network co-ordinators. This website and its contents are the exclusive property of ANGA Media Corporation . We appreciate your feedback and respond to every request. Please fill in the form or send us email to: [email protected]
Previous: Video shows tornado approaching a highway in Alberta
Next: Researchers have no idea what made this huge hole on Mars