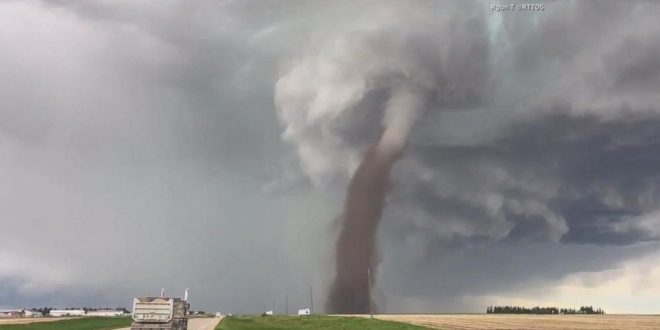 A tornado was caught on video as it touched down near Three Hills, Alberta, northeast of Calgary on Friday.

According to Environment Canada, the tornado was classified as an EF0, the weakest rating on the Enhanced Fujita Scale which categorizes tornadoes based primarily on the damage they do.

An EF0 tornado has maximum winds of about 137 km/h.

Environment Canada estimates the wind speed of this particular tornado as between 90 and 130 km/h.

Currently. no injuries have been reported as a result of the tornado, which was part of a series of storms that prompted severe thunderstorm warnings through much of the province.

Web articles – via partners/network co-ordinators. This website and its contents are the exclusive property of ANGA Media Corporation . We appreciate your feedback and respond to every request. Please fill in the form or send us email to: [email protected]
Previous: Acidified ocean water found along US West Coast, A New Study Reveals
Next: Researchers discover hottest giant exoplanet ever observed