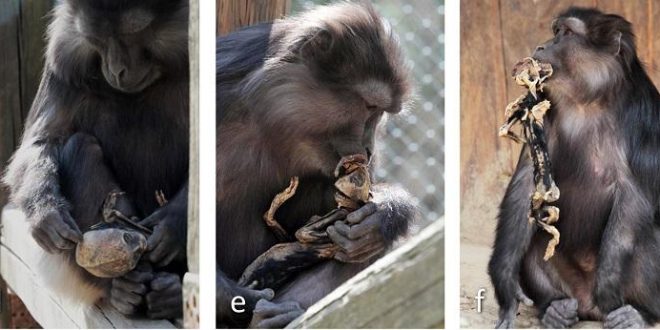 In a world first, a Tonkean macaque mother has been seen eating the mummified remains of her dead baby after carrying its lifeless body around for weeks.

Scientists studying macaques at the Parco Faunistico di Piano dell’Abatino animal sanctuary observed a new mother named Evalyne “caring” for her deceased infant for weeks, and then consuming its mummified body until nothing but a single bone remained.

Tonkean macaques—which are native to Southeast Asia—tote around their babies’ corpses for hours or, even days. It could be a manifestation of grief, or an absence of understanding that the offspring is dead.

Evalyne gave birth at the Parco Faunistico di Piano dell’Abatino animal sanctuary in Italy, but her infant died after only four days. For two days, she appeared devastated, repeatedly staring and screaming at her own reflection in the plastic door to the enclosure.

Then, she shifted her attention to the corpse, carrying it around and grooming it, paying special attention to its head and face.

“After progressively desiccating in the first week, the corpse reached complete mummification on the eighth day,” the researchers wrote in the paper. “The skull detached on the fourteenth day.”

“During the second week, Evalyne continued to place the corpse on her belly and to groom it, although the skin and flesh had disappeared from the skull. She kept the body with her and carried it in one hand or in her mouth, and rushed to retrieve it if it fell.”

“The other group members did not pay particular attention to Evalyne, and none attempted to touch the corpse.”

On the 19th day, Evalyne was first observed consuming small parts of the corpse. By the 22nd day, the corpse had fully disintegrated, parts of it scattered throughout the enclosure, although Evalyne always carried a piece in her mouth or hand.

By the 25th day, she had consumed the entire corpse down to a single bone.

Other primate species have been observed eating their own deceased babies. Baboons, orangutans, wild bonobos, Japanese macaques and rhesus macaques have all done so, although the reason why they do this is still unknown.

However, the behaviour is still unusual, especially considering that the Tonkean macaque, native to the island of Sulawesi in Indonesia, predominantly eats fruit.

“There is no indication that filial cannibalism in the mother Tonkean macaque was due to nutritional or social stress, and such a behaviour could be considered as a normal, albeit rare feature of the behavioural repertoire of macaques,” the researchers wrote.

“It is possible that by the stage of cannibalism the mother had lost any clear representation of what the mummified remains of her infant were.”

Web articles – via partners/network co-ordinators. This website and its contents are the exclusive property of ANGA Media Corporation . We appreciate your feedback and respond to every request. Please fill in the form or send us email to: [email protected]
Previous: World’s second-largest diamond sells for $53 Million
Next: Does coffee’s caffeine protect against Parkinson’s Disease?