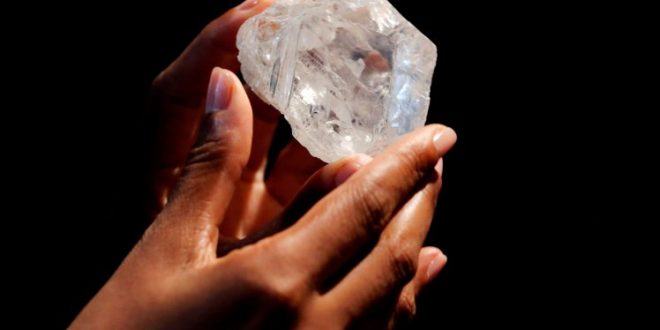 The world’s second-biggest diamond has finally found a buyer.

After failing to sell at a Sotheby’s auction last year, the 1,109-carat uncut stone has now fetched $53 million in a private sale to luxury jeweler Graff Diamonds.

London-based jeweller Laurence Graff bought the Lesedi La Rona diamond, which was found in Botswana in 2015. The seller was the Canadian Lucara Diamond Corporation, which owns the mine.

In a statement, Graff said the deal “was closed with a handshake after more than a year of negotiations.”

The gem, about the size of a tennis ball and weighs in at 1,109 carats, went up for auction at Sotheby’s last year, Fortune magazine reported, but failed to meet its US$70 million reserve price.

It was worth the wait for Graff, which managed to grab the stone for US$8 million less than the US$61 million highest bid at the auction.

According to Fortune, the stone is the largest gem-quality rough diamond to have been found this century, with the largest ever found being the 3,107-carat Cullinan Diamond, which was discovered in 1905 in South Africa. The largest cut gem from the Cullinan is the 530-carat Great Star of Africa, which sits on one of the Crown Jewels belonging to the United Kingdom’s Queen Elizabeth II.

Now it is Graff’s job to turn the natural marvel into several sparkling stones.

“Our highly skilled team of master craftsmen will draw on many years of experience of crafting the most important diamonds, working night and day to ensure that we do justice to this remarkable gift from Mother Nature,” founder Laurence Graff said in a statement. “The stone will tell us its story, it will dictate how it wants to be cut, and we will take the utmost care to respect its exceptional properties.”

According to Fortune, Graff already bought a fragment of the Lesedi La Rona earlier this year. The smaller 374-carat diamond was originally part of the larger one, but broke off during the mining process. In its statement, Graff described the purchase as helping to enable a “poignant reunion.”

The Karowe mine, where the Lesedi La Rona was found, also yielded the world’s most expensive diamond, the 813-carat Constellation, which Lucara sold to a Dubai company for US$63 million, according to The Street. It was later sold to Swiss luxury watchmaker De Grisogono last year for an undisclosed amount.

Experts say that the Lesedi La Rona fetched less money because the stone is likely to be more difficult to cut and has an inferior colour to the Constellation.

“If you take the potential outcomes from the stone into consideration, the risk that the buyer is actually taking, you can now see why it wasn’t the easiest one to sell,” Lucara chief executive officer William Lamb told LiveMint.com.

Web articles – via partners/network co-ordinators. This website and its contents are the exclusive property of ANGA Media Corporation . We appreciate your feedback and respond to every request. Please fill in the form or send us email to: [email protected]
Previous: Hundreds of sharks spotted off NSW north coast (Video)
Next: In Photo: Cannibal macaque mother pictured eating her own mummified baby