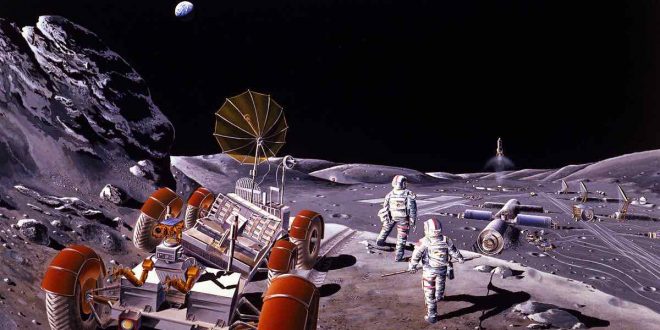 NASA and the Russian space agency Roscosmos have announced a new partnership for human exploration of the moon and deep space.

In other words, NASA is most likely going back to the moon, and probably going to Mars, all with the help of the Russians. Or so the two outfits claim.

The move to partner with Russia on manned missions to the moon —and from there to making the big jump to the Red Planet — came as NASA continues to flesh out ideas for the deep-space gateway to Mars. The mission is intended to send astronauts to cislunar space by the 2020s and Mars by the 2030s, the idea being that orbiting the moon will help astronauts and cosmonauts get cozy with venturing into deep space.

A crewed mission to the moon and ultimately deep space would likely involve NASA’s gigantic new Space Launch System rocket and the Orion space capsule along with the construction of a mini-space station. “This plan challenges our current capabilities in human spaceflight and will benefit from engagement by multiple countries and U.S. industry,” NASA officials said in a statement.

So, there are a few things that are remarkable about this. For starters, it’s worth remembering that the space race really got going because the United States was directly competing with Soviet Russia on just about everything, including who could get rockets and men (specifically, in the case of the United States) blasted into orbit first without said rockets blowing up.

On top of the more distant historic connotations, it should be noted that relations have also been rather tense with Russia in recent years as well. In a burst of thriftiness after the space shuttle was retired, the Obama administration opted to start paying to hitch rides with the cosmonauts to the International Space Station.

That was fine, as long as everyone was getting along, and a bit of a problem when Russia and the United States clashed and that was the only sure way to get to the ISS. Astronauts and cosmonauts like to emphasize that politics has no place in space travel, but it’s well nigh impossible to avoid noticing that politics is laced all through this issue.

Which brings us up to the most recent deal.

The plan to work together and build the deep-space gateway to Mars and the rest of the solar system is great in that in a world devoid of politics, it would actually lead to a couple of powerful countries combining forces to do some incredible work and make important discoveries. It would all be very Star Trek-ian, exploring strange new worlds, etc.

However, we’re talking about a pair of countries that have been clashing and vying for influence in various spheres of the world for decades, without any signs — based on, say, recent U.S. election meddling revelations — that it’s stopping anytime soon.

The idea that Russia and the United States — or even the Russian space agency and NASA, which is a slightly more nuanced relationship — can get along on enough fronts to actually work together to build this project is optimistic at best. Now the Mars jump, which is currently predicated on making cislunar orbit a regular occurrence, is being built on a deal with the entire reason NASA was created in the first place.

Elon Musk is due to announce more details about his plan to get colonists to Mars on Friday. Based on this new deal with Russia, those who really have a hankering to get to Mars anytime soon may want to start focusing on what Musk has planned. Oddly enough, his one-way ticket to Mars is looking like a much better bet than waiting to see how things pan out between Russia and NASA.

Web articles – via partners/network co-ordinators. This website and its contents are the exclusive property of ANGA Media Corporation . We appreciate your feedback and respond to every request. Please fill in the form or send us email to: [email protected]
Previous: Russia Launches Space Cargo Ship To “ISS”
Next: Yellowstone supervolcano eruption could wipe out life on Earth (research)