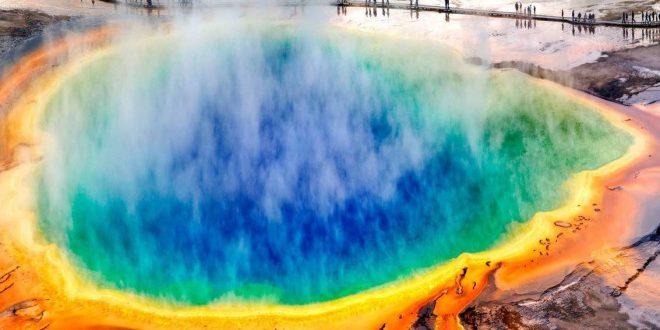 Yellowstone supervolcano eruption could wipe out life on Earth (research)

Yellowstone supervolcano eruption could wipe out life on Earth (research)

Researchers studying the massive supervolcano under Yellowstone Park have bad news: It could erupt much faster—and sooner—than they previously realized.

The supervolcano last erupted around 630,000 years ago, and scientists believe such eruptions were triggered by the influx of new magma into its large chamber. However, where previously scientists thought that process took place over thousands of years, new evidence suggests the time scale is actually more like a few decades, according to the New York Times.

Researchers at Arizona State University presented their findings at a conference of the International Association of Volcanology and Chemistry of the Earth’s Interior in August.

“It’s shocking how little time is required to take a volcanic system from being quiet and sitting there to the edge of an eruption,” said Arizona State graduate student Hannah Shamloo told the Times.

What that means in practice is that there would be less warning than initially thought for when the supervolcano starts building up for another eruption. However, the research doesn’t suggest that such an eruption is imminent, or even likely.

The United States Geological Survey (USGS), which monitors volcanoes in U.S. territory, says there’s no evidence of an uptick in activity at Yellowstone, and USGS research geologist Jacob Lowenstern told Time Magazine the odds of a super eruption within the next century are about one in 10,000.

One of the researchers, Christy Till, even took to Twitter to calm fears that such an eruption was imminent.

The Yellowstone volcano is one of only a handful of supervolcanoes on Earth with the power to eject at least 1,000 km3 of rock and ash into the atmosphere, which the New York Times says is 2,500 times more than what was ejected during the 1980 Mount St. Helens eruption.

Web articles – via partners/network co-ordinators. This website and its contents are the exclusive property of ANGA Media Corporation . We appreciate your feedback and respond to every request. Please fill in the form or send us email to: [email protected]
Previous: NASA and Russia will cooperate to build moon’s first space station
Next: Scientists alarmed by mass Antarctic penguin chicks die-off