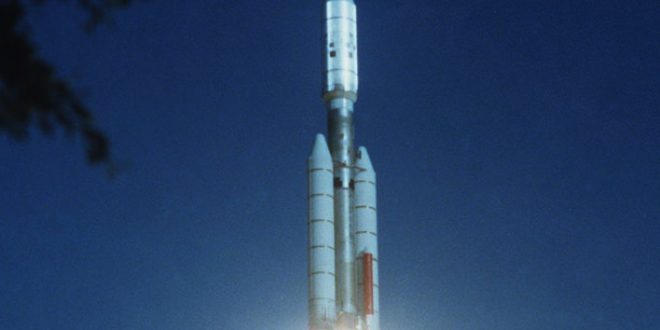 In 1977, NASA launched the twin Voyager spacecraft to traverse the far reaches of the solar system and beyond. Voyager 2 left on August 20, followed by Voyager 1 on September 5.

The US spacecrafts Voyager 1 and Voyager 2 were launched 16 days apart in August and September of 1977. Both the missions took advantage of a once-in-175-year alignment of planets that allowed between them to visit all the gaseous planets of the solar system.

PBS last month released a documentary to commemorate the 40th anniversary of the Voyager missions, The Farthest: Voyager In Space, which can be streamed online. Here’s the network’s writeup of the event:

The twin spacecraft—each with less computing power than a cell phone—used slingshot trajectories to visit Jupiter, Saturn, Uranus and Neptune. They sent back unprecedented images and data that revolutionized our understanding of the spectacular outer planets and their many peculiar moons.

Still going strong four decades after launch, each spacecraft carries an iconic golden record with greetings, music and images from Earth—a gift for any aliens that might one day find it. Voyager 1, which left our solar system and ushered humanity into the interstellar age in 2012, is the farthest-flung object humans have ever created.

A billion years from now, when our sun has flamed out and burned Earth to a cinder, the Voyagers and their golden records will still be sailing on—perhaps the only remaining evidence that humanity ever existed.

Web articles – via partners/network co-ordinators. This website and its contents are the exclusive property of ANGA Media Corporation . We appreciate your feedback and respond to every request. Please fill in the form or send us email to: [email protected]
Previous: Peggy Whitson, Record-setting US Astronaut Returns Home From Space
Next: Endangered Species: Nicaragua fights to save tapirs