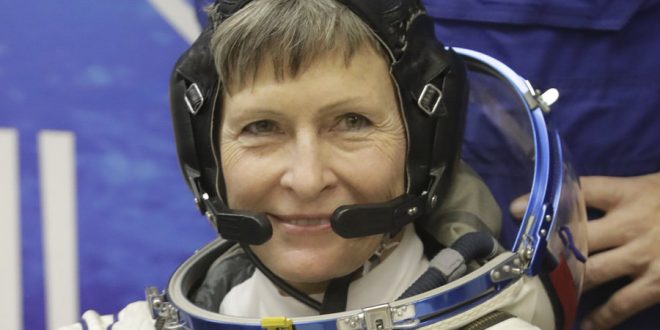 An Iowa astronaut who has spent nearly 9 and half months in space made her journey back to Earth on Saturday.

Record-breaking US astronaut Peggy Whitson and two other members of the International Space Station crew have returned to Earth.

Mrs Whitson has spent 665 days off the planet – 288 on this mission alone – exceeding the time spent in orbit by any American or woman worldwide.

Along with fellow American Jack Fischer and Russian Fyodor Yurchikhin, Mrs Whitson touched down in Kazakhstan shortly after sunrise on Sunday.

Mr Fischer and Mr Yurchikhin both travelled to the ISS in April. The Russian has logged even more days in orbit than Ms Whitson – 673 days in total across five missions.

As well as duration, Mrs Whitson broke multiple records during her latest mission, her third to the station.

She became the world’s oldest spacewoman at the age of 57 and most experienced female space walker following her launch last November. She was also the first woman to command the space station twice.

After landing back on Earth, the three astronauts were embraced and posed for photos before being carried in chairs to a medical tent for standard check-ups.

On the eve of their departure from the ISS, the station’s newest commander, Randy Bresnik, told the trio: “We are in your debt for the supreme dedication that you guys have to the human mission of exploration.”

Mr Yurchikhin is seventh in the all-time global list for time spent in orbit, followed by Mrs Whitson. The top spot is held by Russian Gennady Padalka, with 879 days in space over five flights.

Mrs Whitson was originally due to return to Earth in June, but when an extra seat became available on the Soyuz MS-04 spacecraft that brought them home on Sunday, she took the chance to spend an additional three months in space.

Scott Kelly is the only American to have spent more time in space on a single mission than Mrs Whitson. Mr Kelly, who orbited the planet for a year, tweeted his congratulations to the crew on their safe return.

The next flight to the ISS leaves on September 12, when two Americans and a Russian will join the three men currently on board.

Web articles – via partners/network co-ordinators. This website and its contents are the exclusive property of ANGA Media Corporation . We appreciate your feedback and respond to every request. Please fill in the form or send us email to: [email protected]
Previous: Married Oklahoma man, 41, dies after running into flames at Burning Man
Next: NASA to mark 40th anniversary of Voyager launches (Video)