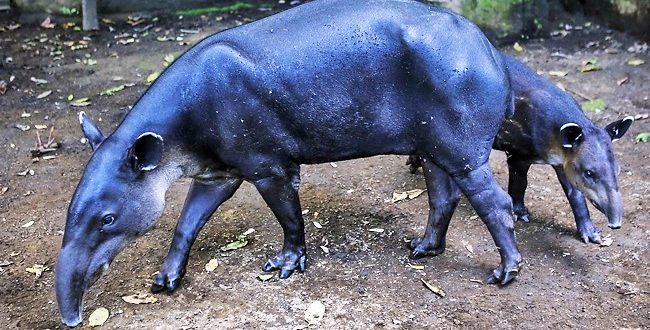 Endangered Species: Nicaragua fights to save tapirs The tapir is one of the 28 species of mammals in Nicaragua - which also include anteaters, jaguars, pumas and howler, spider and white-faced monkeys - threatened by the degradation of their habitat. / AFP PHOTO / INTI OCON

Nicaragua is fighting to save its endangered tapirs from hunting and habitat destruction caused by climate change.

Baird’s tapir is the largest indigenous mammal in Central America. It is a primitive animal that resembles the ancestor of rhinos and horses, and has changed very little in the last 35 million years. Characterised by a long, fleshy nose, like a shortened version of an elephant’s trunk, this shy quiet mammal lives in tropical forests and grasslands and is rarely seen. The species is currently declining as a result of habitat destruction and hunting. Its low reproductive rate makes it even more vulnerable to these threats.

“Here, they’re well-fed,” said Eduardo Sacasa, a wildlife expert who runs the reproductive programme. In some cases, too much so: one of the males, a three-year-old called Pamka, was put on a diet because “he is too fat”.

Human encroachment and climate change have decimated the woodland habitat of the Baird’s tapir, one of five species left in the world, and, along with human and feline predators, have helped wipe out 16 other tapir species.

Pamka and his fellow herbivores are among no more than 800 of the species left Nicaragua.

The Baird’s tapir, considered at risk of extinction by the International Union for Conservation of Nature (IUCN), is the “most threatened” quadruped in Nicaragua, Sacasa said. It faces “flat-out deforestation, encroaching farmland, illegal sales and poaching, because people eat them”, he said.

In Ticuantepe Zoo, efforts are deployed to have them reproduce. But that’s no easy task. Gestation is long – 14 months – and females produce only one offspring at a time.

Web articles – via partners/network co-ordinators. This website and its contents are the exclusive property of ANGA Media Corporation . We appreciate your feedback and respond to every request. Please fill in the form or send us email to: [email protected]
Previous: NASA to mark 40th anniversary of Voyager launches (Video)
Next: Bacteria in throat may indicate joint infection risk in Children