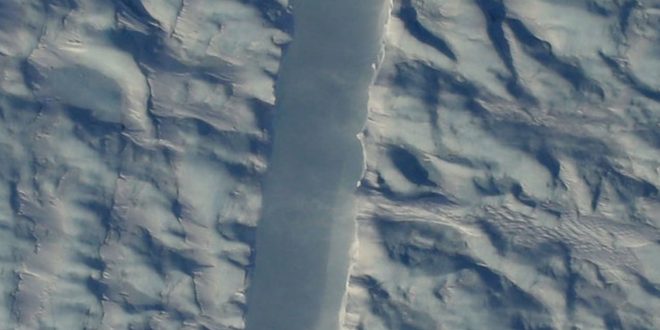 NASA just snapped the first photos of a mysterious crack in one of Greenland’s largest glaciers.

Scientists at NASA’s Operation IceBridge are photographing shrinking Arctic and Antarctic ice to study the effect of climate change on the planet’s polar regions.

Stef Lhermitte, a Delft University of Technology professor, first noticed the crack in the middle of the glacier in satellite images. He told The Washington Post that “it is difficult to already say anything about what exactly caused the crack on this unusual spot.”

The large glacier connects the Greenland ice sheet to the Arctic Ocean. Researchers are looking into the possibility that the crack could affect sea-level rise estimates.

“It is unusual to see cracks forming from the center. They usually form on the sides,” NASA’s Eric Rignot, a University of California-Irvine researcher, told the Washington Post. “This could indicate that the ice shelf has gotten too thin in the middle.”

Web articles – via partners/network co-ordinators. This website and its contents are the exclusive property of ANGA Media Corporation . We appreciate your feedback and respond to every request. Please fill in the form or send us email to: [email protected]
Previous: Youngsters using smartphones lose out on sleep, Says New Study
Next: Fake news? Married Couple Discovers They’re Actually Biological Twins