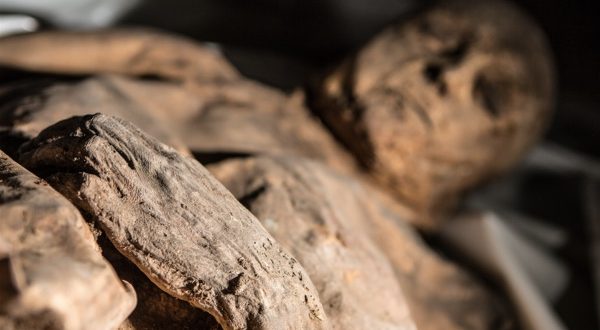 Researchers have discovered genetic evidence of smallpox from the remains of a 17th century mummy found in a crypt beneath a Lithuanian church. The early DNA provides a timeline of the highly infectious disease that was finally eradicated in the 20th century.

“There have been signs that Egyptian mummies that are 3,000 to 4,000 years old have pockmarked scarring that have been interpreted as cases of smallpox,” says first author Ana Duggan, a postdoctoral fellow at the McMaster University Ancient DNA Center in Canada. “The new discoveries really throw those findings into question, and they suggest that the timeline of smallpox in human populations might be incorrect.”

The research team gathered the disintegrated variola virus DNA from the mummy after obtaining permission from the World Health Organization. Using RNA baits designed from existing variola sequences, the researchers targeted variola sequences found within the extracted DNA from the mummy’s skin. Then they reconstructed the entire genome of the ancient strain of the virus and compared it to versions of the variola virus genome dating from the mid-1900s and before its eradication in the late 1970s. They concluded that these samples shared a common viral ancestor that originated sometime between 1588 and 1645–dates that coincide with a period of exploration, migration, and colonization that would have helped spread smallpox around the globe.

“So now that we have a timeline, we have to ask whether the earlier documented historical evidence of smallpox, which goes back to Ramses V and includes everything up to the 1500s, is real,” says co-author Henrik Poinar, the director of the Ancient DNA Centre at McMaster University in Canada. “Are these indeed real cases of smallpox, or are these misidentifications, which we know is very easy to do, because it is likely possible to mistake smallpox for chicken pox and measles.”

In addition to providing a more accurate timeline for the evolution of smallpox, the researchers were also able to identify distinct periods of viral evolution. One of the clearest instances of this occurred around the time that Edward Jenner famously developed his vaccine against the virus in the 18th century. During this period, the variola virus appears to have split into two strains, variola major and variola minor, which suggests that vaccination, which led to eradication of smallpox, may have changed the selection pressures acting on the virus and caused it to split into two strains.

The researchers hope to use this work to identify how the sample they discovered in Lithuania compares to others that were sweeping throughout other countries in Europe at the same time. But in the bigger context of smallpox research, the scientists are optimistic that their work will provide a stepping stone to allow virologists to continue to trace smallpox and other DNA viruses back through time.

“Now we know all the evolution of the sampled strains dates from 1650, but we still don’t know when smallpox first appeared in humans, and we don’t know what animal it came from, and we don’t know that because we don’t have any older historical samples to work with,” says co-author Edward Holmes, a professor at the University of Sydney in Australia. “So this does put a new perspective on this very important disease, but it’s also showing us that our historical knowledge of viruses is just the tip of the iceberg.”

The discovery was published in the Cell press journal Current Biology.

Web articles – via partners/network co-ordinators. This website and its contents are the exclusive property of ANGA Media Corporation . We appreciate your feedback and respond to every request. Please fill in the form or send us email to: [email protected]
Previous: First trailer Baywatch reboot The Rock Zac Efron (Watch)
Next: Nasa spots strangely early “night clouds” over Antartica (Photo)