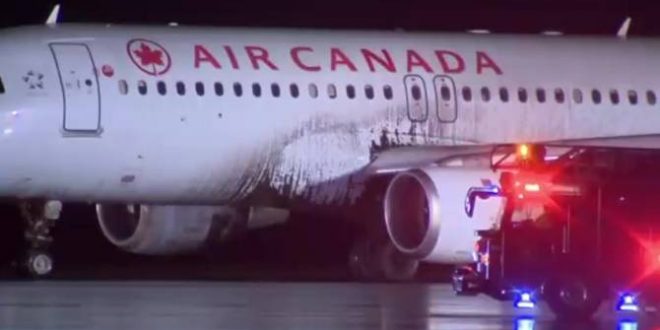 The Transportation Safety Board is investigating after an Air Canada flight from Halifax skidded off the runway at Toronto Pearson International Airport on Friday night.

Air Canada Flight 623 arriving from Halifax carrying 118 passengers slid off the runway amidst heavy fog and rain on Saturday, shortly after midnight.

Media reports indicate there was damage to the side of the aircraft after part of its landing gear swung onto a grassy area before returning to the runway.

No one was injured in the incident, but passengers were held on the plane for roughly one hour.

The plane was towed off the runway and Grater Toronto Airports Authority officials said repairs and cleanup are underway.

Pearson International Airport tweeted the runway will be closed until the TSB completes its investigation.

No delays are expected as a result of the incident.

TSB says it’s too early to identify what caused the plane to skid off the runway.

Air Canada has provided passengers with hotel accommodations and limousines for those wishing to travel home.

Web articles – via partners/network co-ordinators. This website and its contents are the exclusive property of ANGA Media Corporation . We appreciate your feedback and respond to every request. Please fill in the form or send us email to: [email protected]
Previous: Juno Probe To Remain In Current Orbit Around Jupiter, Report
Next: Solar Probe Plus mission: NASA may send robotic spacecraft to Sun next year