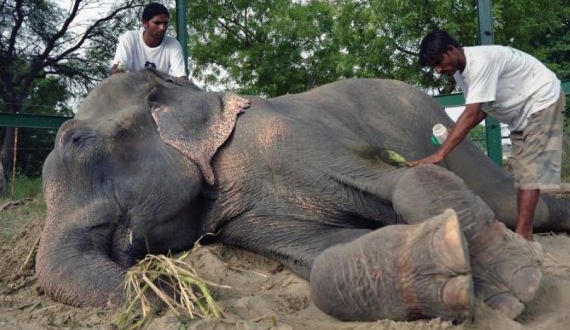 Elephant 'cries' when freed after 50 years in chains

Elephant ‘cries’ when freed after 50 years in chains (Video)

An elephant who was chained and subjected to abuses in Uttar Pradesh, India, for 50 years has wept tears while he was being rescued.

Raju was captured by a drug addict who did not feed him and left him in spiked chains, causing the animal painful and permanent wounds.

The elephant, captured when he was a young calf, was left without any food. He eventually resorted to eating paper and plastic to placate his hunger.

Wildlife SOS, a group established in 1995 to protect India’s wildlife, attempted to rescue Raju from his owner in the Uttar Pradesh region July 2.

His captors layered tighter chains on the elephant and attempted to confuse him with commands, but a team of 10 veterinarians and Wildlife SOS experts along with 20 Forestry Commission officers and two policemen managed to get Raju to safety, the Mirror reported.

“Raju was in chains 24 hours a day, an act of intolerable cruelty. The team were astounded to see tears roll down his face during the rescue,” Wildlife SOS spokesman Pooja Binepal said. “It was incredibly emotional. We knew in our hearts he realized he was being freed. Elephants are majestic and highly intelligent animals. We can only imagine what torture the past half a century has been for him.”

Raju was taken to the Elephant Conservation and Care Centre in Mathura. Fittingly, he took his first steps sans chains on July 4.

Web articles – via partners/network co-ordinators. This website and its contents are the exclusive property of ANGA Media Corporation . We appreciate your feedback and respond to every request. Please fill in the form or send us email to: [email protected]
Previous: Colored home pact expected to get OK (Video)
Next: Castonguay blasts Bolduc, demands his resignation (Video)