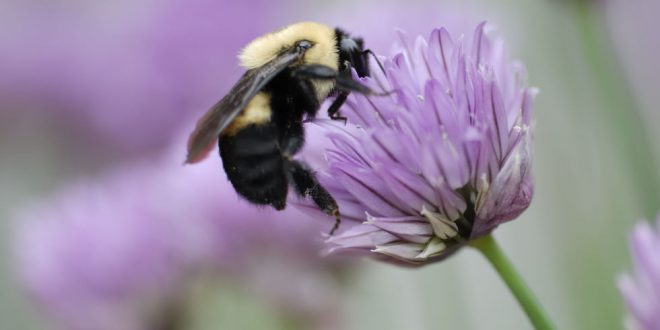 An executive order from the Trump administration has frozen the process that, for the first time, would have given a bee species federal protection.

Last month, the U.S. Fish and Wildlife Service (FWS) declared that it was placing the rusty patched bumblebee on the U.S. endangered species list.

The listing would have taken effect today, making this nearly extinct bumblebee the very first bumblebee species to be protected under the Endangered Species Act. The rusty patched bumblebee (Bombus affinis) would also have been the first wild bee species to be declared endangered in the continental U.S.

Now, thanks to an executive order by U.S. President Donald Trump, the listing has been delayed.

On Jan. 11, the U.S. Fish and Wildlife Service adopted a plan for federal protection to the rusty patched bumblebee during President Barack Obama’s final days in the White House. Law required a 30-day waiting period before taking effect, and the bumblebee’s circled date was Friday, but the Trump administration ordered a 60-day freeze on regulations that hadn’t yet taken effect on Jan. 20.

“The Trump administration has put the rusty patched bumblebee back on the path to extinction,” Rebecca Riley, senior attorney for the Natural Resources Defense Council, told A.P. “This bee is one of the most critically endangered species in the country and we can save it – but not if the White House stands in the way.”

While one group was against the freeze, the American Farm Bureau Federation came out in support of halting the move, arguing the measure “could lead to costly limits on land or chemical use and that private partnerships could more effectively preserve bee habitat.”

Gary Frazer, the Fish and Wildlife Service’s assistant director, told A.P. that the freeze from the White House should not deter conservation efforts.

As for the rusty patched bumblebee, the species has disappeared from upwards of 90 percent of its range in the last two decades, according to A.P. Scientists point to the spread of disease, pesticides, loss of habitat and climate change as causes.

“Becoming an endangered species, though, is helpful in galvanizing attention, attracting funding and research to the problem as well as providing a regulatory buffer,” Sam Droege, of the U.S. Geological Survey, told Popular Science. “I would hope that non-governmental groups would step into the breach and help fund the necessary work.”

Web articles – via partners/network co-ordinators. This website and its contents are the exclusive property of ANGA Media Corporation . We appreciate your feedback and respond to every request. Please fill in the form or send us email to: [email protected]
Previous: Audi Q8: Production version coming in 2018 (Watch)
Next: Bruce Springsteen’s ‘Harry Potter’ song has dropped (Listen here)