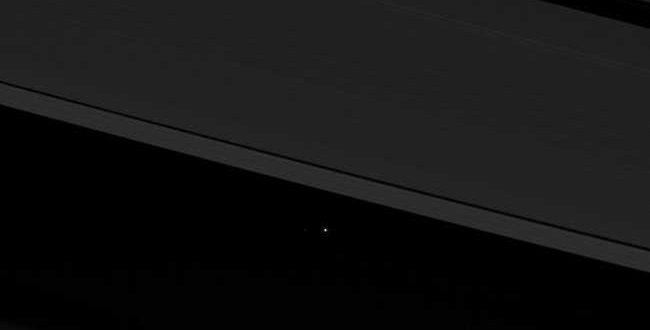 NASA on Thursday released a photo taken from the Cassini spacecraft that shows a tiny-looking Earth from the view between Saturn’s icy rings.

The spacecraft captured the view on April 12, 2017 at 10:41 p.m. PDT (1:41 a.m. EDT). Cassini was 870 million miles (1.4 billion kilometers) away from Earth when the image was taken. Although far too small to be visible in the image, the part of Earth facing toward Cassini at the time was the southern Atlantic Ocean.

Earth’s moon is also visible to the left of our planet in a cropped, zoomed-in version of the image.

The rings visible here are the A ring (at top) with the Keeler and Encke gaps visible, and the F ring (at bottom). During this observation Cassini was looking toward the backlit rings, making a mosaic of multiple images, with the sun blocked by the disk of Saturn.

Seen from Saturn, Earth and the other inner solar system planets are all close to the sun, and are easily captured in such images, although these opportunities have been somewhat rare during the mission. The F ring appears especially bright in this viewing geometry.

The Cassini mission is a cooperative project of NASA, ESA (the European Space Agency) and the Italian Space Agency. The Jet Propulsion Laboratory, a division of the California Institute of Technology in Pasadena, manages the mission for NASA’s Science Mission Directorate, Washington. The Cassini orbiter and its two onboard cameras were designed, developed and assembled at JPL. The imaging operations center is based at the Space Science Institute in Boulder, Colorado.

See that dot between #Saturn's rings? That's us. All of us, in Cassini's last view of Earth, a billion miles away. https://t.co/boo1hiejhI pic.twitter.com/KBy2KZ57vG

Web articles – via partners/network co-ordinators. This website and its contents are the exclusive property of ANGA Media Corporation . We appreciate your feedback and respond to every request. Please fill in the form or send us email to: [email protected]
Previous: Call Of Duty Is Officially Heading Back To World War II (Report)
Next: Researchers debunk theory that hobbits were man’s cousin