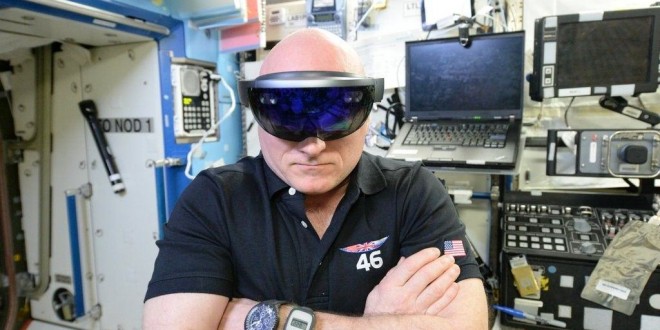 NASA sent two Microsoft HoloLens augmented reality headsets into space to the International Space Station in December. Now Microsoft has posted an image of astronaut Scott Kelly wearing the HoloLens headset on board the ISS.

The project, called Sidekick, helps the crews with work on repairs, saving them the strain of going through a manual.

They are also given support by those back on Earth over Skype, with voice direction and note drawing, as well as animated visuals.

However, at the moment this would only be practical while in orbit around the Earth, as interplanetary delays can be minutes long.

This #saturdaymorning checked out the @Microsoft #HoloLens aboard @Space_Station! Wow! #YearInSpace pic.twitter.com/OZlWmzWjsY

ISS astronaut Scott Kelly posted the above picture of himself wearing HoloLens on the International Space Station over the weekend.

In other VR news, Facebook founder Mark Zuckerberg recently argued that the format will be “the most social platform”.

Web articles – via partners/network co-ordinators. This website and its contents are the exclusive property of ANGA Media Corporation . We appreciate your feedback and respond to every request. Please fill in the form or send us email to: [email protected]
Previous: ‘The Mermaid’: China’s hottest film ever is about mermaids “Video”
Next: Robert Pickton pens bible-quoting book from prison