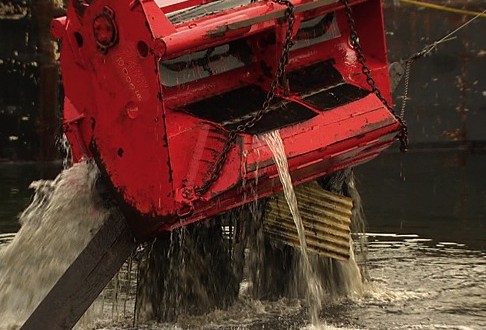 Posted by: News Dec 9, 2013 in Press Releases Leave a comment

It’s a first-of-its kind clean-up program launched after many years of planning by the Washington State Department of Ecology. And with the first load of gunk hauled up by an enormous crane, an important chapter begins.

The owner of the Northlake Shipyard bought the property years ago at a discount with the understanding he’d pay into a fund each year for many years.

Now that fund is removing arsenic-laced sand blasting sediment put there in the 1960s and 1970s by the former owner, who is long since out of business.

The dredging will remove 8,000 tons in 25 truck loads. It’ll be hauled to a specially licensed landfill. It’s the state’s first legal agreement of its kind works.

“It does work,” said Libby Goldstein, site manager for the WA Department of Ecology. “And now we have $1.6 million that is available for us to clean up the sandblast grit that was placed here by previous owners of this property.”

If you could look under the surface in lots of places around Lake Union, you’d see the legacy of a different way of thinking. For generations, Lake Union was a convenient place to dump industrial waste.

The Museum of History and Industry now stands watch over Lake Union, chronicling how Indian settlements gave way to sawmills. Shipyards and chemical plants once ringed Lake Union, and there were no pollution laws back then.

Today, Lake Union is recognized as one of the great urban gems in America. Boaters love it, wildlife has returned and volunteers clean up the litter.

In removing contaminated sediment, the bucket finds a lot debris; tires, a huge log and who knows what else.

“There are a lot of surprises,” said Goldstein, watching each giant bucket full of gunk rise from the water and empty onto a massive barge.

There are even remnants of sunken vessels.

“It is a very exciting day,” she said. “We’ve been planning this project for years. And watching the first few buckets come up, even though it was part of a vessel, it was still exciting. We’re cleaning up this area.”

Investigators even now will be analyzing contaminants to identify other polluters from long ago.

The DOE says other Lake Union sites may get an intense clean up, including off shore from Gas Works Park under a potential plan between the City of Seattle and Puget Sound Energy which now owns a company that once operated there.

Web articles – via partners/network co-ordinators. This website and its contents are the exclusive property of ANGA Media Corporation . We appreciate your feedback and respond to every request. Please fill in the form or send us email to: [email protected]
Previous: Pregnancy rate 2013 : US women having fewer children
Next: AP College Football Poll : Florida State, Auburn on top