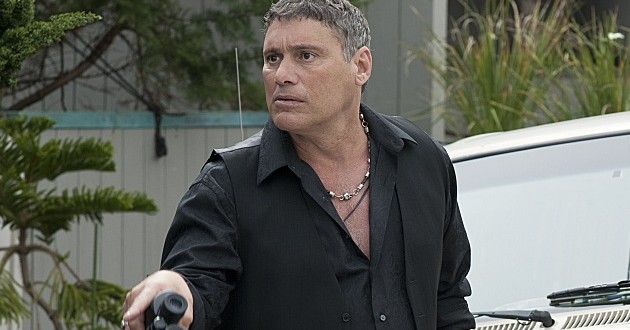 I knew that when I got the chance to talk to Steven Bauer, who plays Ray Donovan’s right hand man Avi in the new Showtime drama Ray Donovan, that there were a few topics I wanted to hit, besides his current show. One was Scarface, the movie where he played his breakout role of Manny Ribera, confidant to Al Pacino’s Tony Montana. Another was his brief but memorable role as cartel magnate Don Eladio on Breaking Bad.

All of those topics were discussed in my piece on PARADE.com. But one other topic that had me curious, and one that I thought AFT readers would like to hear about was when Bauer took over for Ken Wahl on CBS’s critically-praised, ratings-challenged drama Wiseguy for its fourth and final season.

Wiseguy, produced by ’80s action master Stephen J. Cannell, aired from 1987-90 and was a gritty forerunner of the highly-serialized dramas that are all over the TV landscape, especially on cable. Characters with shifting motivations, multi-episode arcs and dark situations like that show had were unheard of on TV in general back then, even among the era’s “prestige” shows, like Hill Street Blues and L.A. Law. The fact that it made it through three-and-a-half low-rated seasons seems like almost a miracle now.

But the show was already on its last legs when Bauer was tapped to play Michael Santana, as Cannell promised the network that the show would become less serialized, a move that Wahl balked at. So Wahl left, and Bauer was in, which is where we pick up the conversation there.

Web articles – via partners/network co-ordinators. This website and its contents are the exclusive property of ANGA Media Corporation . We appreciate your feedback and respond to every request. Please fill in the form or send us email to: [email protected]
Previous: How to help someone who is suicidal : Cops use Facebook to talk man out of suicide
Next: Mary elizabeth mastrantonio 2013 : Actress on Without a Trace