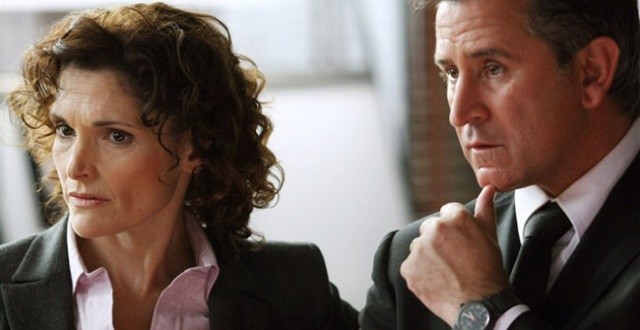 Mary elizabeth mastrantonio 2013 : Actress on Without a Trace

Mary elizabeth mastrantonio 2013 : Actress on Without a Trace

“I hadn’t seen him in a couple of days,” she explains.

He’s juggling high school and she’s spending afternoons and nights at the American Airlines Theater as she readies for her first Broadway work in a decade.

“Let’s face it: I invited them to join me on this journey and I should be around for most of it,” she says, laughing, referring to her family. “I quite enjoy it, actually. I like doing that job – mother.”

Mastrantonio, the “Law & Order: Criminal Intent” veteran, has built a respected career as an actress – she shot at Tony Montana in “Scarface” and was a fishing boat captain in “The Perfect Storm” – but mom has always been her preferred role.

“I think parenting is the most humbling experience,” she says.

She and her family – husband Pat O’Connor, the director of “Inventing the Abbotts” and “The January Man,” and her sons Declan and Jack, 20 – recently returned to America after more than two decades in London.

Mastrantonio landed a role on CBS’ “Hostages” and the Roundabout Theatre Company’s “That Winslow Boy,” a British play by Terence Rattigan about the lengths a family will go to after their son is expelled from a naval college for stealing.

The 54-year-old actress, who was last on Broadway in the musical “Man of La Mancha,” sat down with The Associated Press to discuss the play, the show “Hostages” and life in England.

AP: Why is Rattigan such an important playwright?

Mastrantonio: I find his plays so linear, so real. They’re pointed and they’re dark, but they’re lacking in vindictiveness. He’s not there to grandstand. Ever. He just gives you an honest depiction of people.

AP: Have you ever done one of his plays before?

Mastrantonio: No, I had to come back to America to be English.

AP: Was it a big culture change?

Mastrantonio: I remember standing in a shop when Jack was just 9 months and this woman says, ‘Is that your baby?’ I said, ‘Yes.’ All she said was, ‘Big.’ That was it! That was the whole exchange! Big! Too big? Have I done something wrong? I thought to myself, ‘Lady, you are SO not American. You’re definitely NOT Italian.’

AP: Does doing this play make you wonder how far you would go for your kids?

Mastrantonio: I would go to the wall. To the wall.

AP: But what about the costs?

Mastrantonio: I don’t think you know. You just keep going. It’s not a decision. In retrospect you might say, ‘If I’d known that, I wouldn’t have done this.’ But all you can do is keep going.

AP: You’re also on the new show “Hostages,” about a surgeon who’s ordered to assassinate her patient, the ailing president of the United States, to save her family. What can you tell us about your story arc?

Mastrantonio: I don’t know! Evidently, there’s been a shift in the cast or something, so I don’t know. I looked at the script the other day and wondered, ‘Did I do it? Is it me?’

AP: What do you mean? You’re the first lady!

Mastrantonio: Right, in the first episode I just sat there and established that there was a first lady. But there’s been a sea change. I have no idea where the story is going. The whole tone of it changed. I thought she was going to be aging arm candy but now I don’t know. I don’t think the writers know.

AP: You’re back onstage. Do you miss singing?

Mastrantonio: Yes, it’s just that there’s just so much time in a day. I understand why people in the arts don’t have children. I have three big relationships in my life that need tending to.

AP: What’s a big difference between the West End in London and Broadway?

Mastrantonio: In England, you’re neither praised nor criticized too drastically. They’re like, ‘That’s a lovely performance. Let’s get on with it.’ So nothing becomes this unbelievable thing that actually can’t satisfy everybody. It’s a thing to do, it’s an activity to participate in. It’s just much more measured.

Mastrantonio: There are a lot of newspapers, which means there are a lot of opinions about what you’re doing so you’re not striving for that one critic or that one kudo or that one accolade. It’s just a work in progress. To be an actor in England is a bona fide occupation. Here you have a bodyguard.

Web articles – via partners/network co-ordinators. This website and its contents are the exclusive property of ANGA Media Corporation . We appreciate your feedback and respond to every request. Please fill in the form or send us email to: [email protected]
Previous: Steven Bauer 2013 : Actor plays Don Eladio on Breaking Bad
Next: Robert Loggia 2013 : Actor In on the “Family Guy” Joke