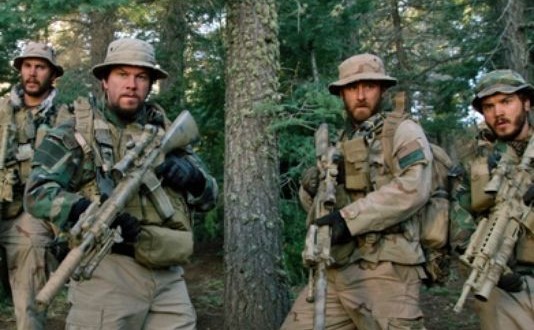 “Lone Survivor,” which expanded from 2 to 2875 theaters this weekend, finished a dominant number one at the box office.

Directed by Peter Berg and starring Mark Wahlberg, the film earned an estimated $38.5 million. Based on its rare A+ CinemaScore, it also stands a good chance of benefiting from word-of-mouth in the weeks ahead.

Martin Scorsese’s The Wolf of Wall Street did ok business in its 3rd weekend, grossing $9-M for a domestic total of $78.6-M. Placing #3, the controversial film continues to do best on the coasts.

Millennium Films’ new entry The Legend of Hercules followed with a weak $8.6-M, tying with holdover American Hustle for # 4.

American Hustle remained strong as it crossed the $100-M mark in North America, ending its 4th weekend in nationwide release with a take of $101.6-M.

A number of award contenders expanding on the eve of Sunday’s Golden Globes ceremony, including John Wells’ August: Osage County and Spike Jonze’s Her, both of which are now playing nationwide.

In addition to benefiting from any Golden Globe wins, contenders also wanted to have an increased profile when Oscar nominations are announced 16 January.

The dysfunctional family drama, from The Weinstein Co., bested Her despite playing in far fewer theaters (905 Vs 1,729).

Similar to Lone Survivor, Osage County was driven by a strong turnout in America’s heartland. The adaptation of Tracy Letts’ play pairs Meryl Streep and Julia Roberts for the 1st time.

Disney’s awards hopeful Saving Mr. Banks placed No. 8, earning $6.6 million in its fourth weekend in nationwide release for a domestic total of $68.9 million.

Her, starring Joaquin Phoenix and Scarlett Johansson, grossed a soft $5.4-M to come in # 11.

Among other award titles up for top awards at Sunday’s Globes ceremony, Joel and Ethan Coen’s Inside Llewyn Davis and Alexander Payne’s Nebraska made their biggest pushs to date, they are not playing nationwide.

The big headline in China over the weekend was Universal’s Despicable Me 2, which opened to stellar $13.8-M, the 3rd-best opening of all time for an animated film after Kung Fu Panda ($16.2-M) and Ice Age: Continental Drift ($19.4-M). Universal said the debut was particularly noteworthy since the first Despicable Me did not play in China. The sequel’s worldwide total is now $935.1-M.

Web articles – via partners/network co-ordinators. This website and its contents are the exclusive property of ANGA Media Corporation . We appreciate your feedback and respond to every request. Please fill in the form or send us email to: [email protected]
Previous: Hollande’s affair scandal: Valerie Trierweiler French first lady hospitalized
Next: Pop star Rihanna gets new cross tattoo (PHOTO)