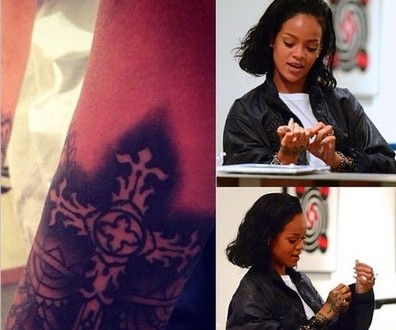 Pop star Rihanna has got a new tattoo, a cross, on her right wrist.

The 25-year-old, who already has more than 20 tattoos, got a large ornate cross, surrounded by designs, at Bang Bang Tattoos here, where she went at midnight and stayed until 5 a.m., reports dailymail.co.uk.

Rihanna has several tattoos, including an Egyptian falcon on her ankle, the Egyptian goddess Isis on her chest, a Sanskrit prayer on her hip, a handgun on her side, as well as several phrases that hold meaning for her in various other places.

In October, she flew Bang Bang and artist Cally-Jo from New York to the Dominican Republic to ink the henna-inspired cover-up of a Maori tribal tattoo on her right hand. Apparently she wasn’t thrilled with the original artwork, completed during a trip to New Zealand, and called on the pair to redesign it.
“Ri flipped out! Absolutely loved it, loved it! It’s a hard thing when you get a tattoo and not absolutely love it,” Bang Bang told E! News after the session.

In 2007, Rihanna opened up about her interest in the culture of tattooing.

“I like hanging out in tattoo shops,” she told Atlanta Peach magazine. “I am so intrigued by tattoos. It’s an entire culture, and I study it.”

“Sometimes I go with friends, or just by myself. I get bum-rushed, but I don’t care. I don’t take security.”

Web articles – via partners/network co-ordinators. This website and its contents are the exclusive property of ANGA Media Corporation . We appreciate your feedback and respond to every request. Please fill in the form or send us email to: [email protected]
Previous: ‘Lone Survivor’ wins American box office
Next: Meet the Addams family values !