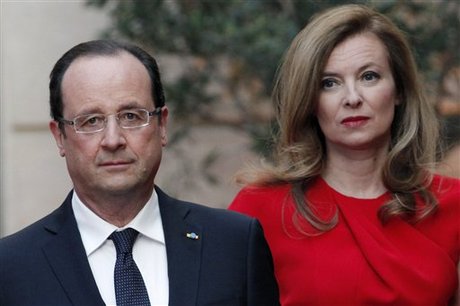 PARIS The woman considered France’s first lady has been hospitalized after a report that the president is having an affair with an actress.

Valerie Trierweiler’s chief of staff, Patrice Biancone, confirmed Sunday that the 48-year-old journalist who lives with President François Hollande has been hospitalized since Friday.

Biancone said she was hospitalized for “rest and a few tests” and is expected to leave the hospital Monday.

Ms Trierweiler’s spokesman Patrice Biancone told the Reuters news agency: “She has been in hospital since Friday. She will leave tomorrow.”

Asked about the future of Trierweiler’s relationship with the president, Mr Biancone said: “She needs rest. Then she will decide what to do.”

On Friday, Mr Hollande threatened to sue celebrity magazine Closer, complaining of breach of privacy after it said he was having an affair with actress Julie Gayet.

He did not make a comment on the alleged relationship.

The magazine published photos of a bodyguard and a helmeted man it says is Hollande visiting the apartment of Ms Gayet, a moderately known French actress who appeared in a clip for his 2012 presidential campaign.

French media faces strict privacy laws, as well as a longtime tradition of ignoring the private lives of public figures.

But the convention of keeping politicians’ personal lives private has been chipped away since Hollande’s predecessor Nicolas Sarkozy divorced his wife Cecilia, who was having an affair, and married model and singer Carla Bruni.

Mr Hollande and Ms Trierweiler, a journalist for celebrity magazine Paris Match, are not married but have been in a long-term relationship for several years.

Web articles – via partners/network co-ordinators. This website and its contents are the exclusive property of ANGA Media Corporation . We appreciate your feedback and respond to every request. Please fill in the form or send us email to: [email protected]
Previous: Actor Sylvester Stallone, London Palladium
Next: ‘Lone Survivor’ wins American box office