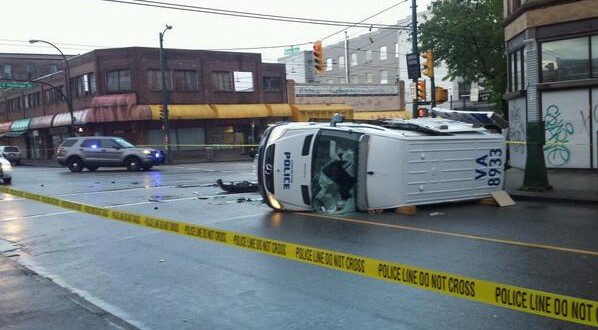 There was a serious crash involving a Vancouver Police wagon this morning.

Police say the wagon was traveling north on Gore Street when it was struck in the intersection by a car traveling west on Hastings Street.

The officer driving the wagon had to kick out the front windshield to exit. Officers then climbed on top of the turned over wagon and removed the prisoner inside.

VPD spokesperson Brian Montague says it appears neither the driver of the car, the police officer or the prisoner being transported by the wagon is believed to be seriously hurt.

He says the police wagon entered the intersection on a green light.

Web articles – via partners/network co-ordinators. This website and its contents are the exclusive property of ANGA Media Corporation . We appreciate your feedback and respond to every request. Please fill in the form or send us email to: [email protected]
Previous: Two Paris police officers charged with raping tourist
Next: Beezin: Kids Are Applying Lip Balm to Their Eyes Now to Get High