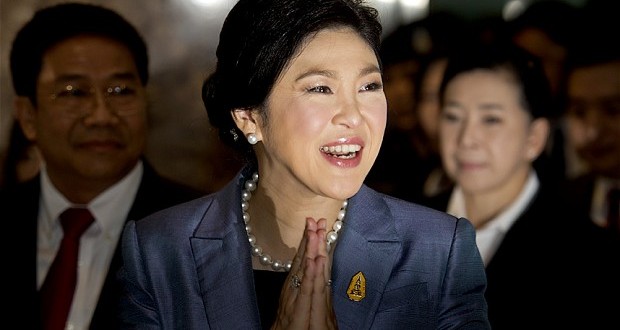 THAI Prime Minister Yingluck Shinawatra was removed from her post after the Constitutional Court ruled she abused her position by transferring a top security official, deepening the nation’s political crisis.

Yingluck, 46, “violated the constitution,” Constitutional Court Judge Udomsak Nitimontree said in a televised ruling. She transferred the secretary-general of the National Security Council in 2011 “to pave the way for the appointment of a relative as the new police chief,” the judge said, in a process that “indicates an abuse of power.”

Yingluck’s Pheu Thai party said the court’s ruling was “a virtual coup against a democratic government” and a “conspiracy to remove the party from power”.

This was a conspiracy against the Pheu Thai because the Constitutional Court and the National Anti-Corruption Commission “unusually rushed to conclude cases against Yingluck without allowing her and the government to provide enough defence witnesses”, it said in a statement.

Yingluck, 46, later appeared live on national television and insisted she did nothing wrong.

“We held true to the principles of honesty in running the country, and never acted corruptly, as we were accused,” said Yingluck.

Her nine cabinet ministers were also dismissed from office after the court found them complicit in the transfer, which the court said was done in an unusual haste in only four days and there was discrepancy in dates of related documents hence the process was irregular.

“Therefore her prime minister status has ended…Yingluck can no longer stay in her position acting as caretaker prime minister,” presiding judge Charoon Intachan said in a televised ruling.

Jubilant anti-government demonstrators, who accuse Yingluck of acting as a proxy for her fugitive brother Thaksin and have been demanding her ouster for the last several months, blew whistles outside the court.

Yingluck has argued that she assigned her deputy to handle the issue so she did not take part in it.

“Transferring with a hidden agenda is not acceptable. The Constitutional Court has ruled unanimously that (Yingluck) has used her status as the prime minister to intervene for her own and others’ benefits to (transfer) a government official,” the court said in its verdict.

The court ruled that only Yingluck, who assumed office as Thailand’s premier on August 5, 2011, and nine others who took part in Thawil’s transfer must be removed from the cabinet and the rest of the ministers can remain in office.

Buddhist-majority Thailand has been rocked by months of political violence that has left several people dead and hundreds wounded, including many anti-government protesters, in grenade attacks and shootings.

Web articles – via partners/network co-ordinators. This website and its contents are the exclusive property of ANGA Media Corporation . We appreciate your feedback and respond to every request. Please fill in the form or send us email to: [email protected]
Previous: Cockpit Automation Is Hurting Pilot Focus, Study
Next: Missing snowshoer may have fallen over edge of Crater Lake, officials say