Home » World » Are you vulnerable? How to protect against the global ‘WannaCrypt ransomware attack’ 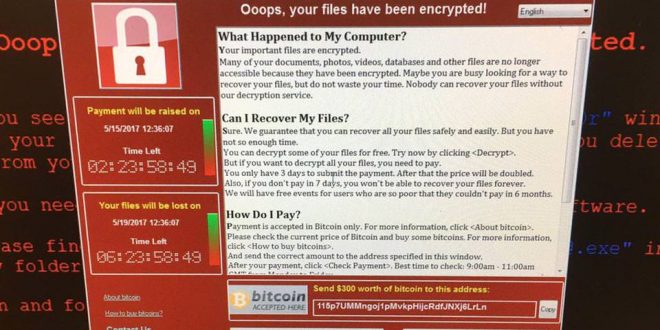 Are you vulnerable? How to protect against the global WannaCrypt ransomware attack

Are you vulnerable? How to protect against the global ‘WannaCrypt ransomware attack’

The cyberattack that spread malicious software around the world, shutting down networks at hospitals, banks and government agencies.

The virus or malware behind the latest cyber-attack has been identified as “ransomware”. This is a virus that locks down either your computer or your web browser, and a message on the screen demands you make a payment in the online currency Bitcoin to have your computer unlocked.

The virus can target home computers, or larger servers that businesses or state agencies operate on. The WannaCry virus involved in the current attack is thought to be based on software developed by the US National Security Agency (NSA).

The WannaCry ransomware is spread through hidden viruses linked in word documents and PDF files sent over email.

How to protect against the global WannaCrypt ransomware attack.

Microsoft posted an official notice on its site regarding the update as well as general guidance regarding the WannaCrypt attack. The update covers users on Windows XP, Windows 8, and Windows Server 2003 (the attack didn’t target Windows 10, according to Microsoft). Additionally, Microsoft advises users to “use vigilance when opening documents from untrusted or unknown sources.”

This update is particularly noteworthy because the patch goes all the way back to Windows XP, a version of Windows Microsoft stopped supporting several years ago. Regarding that unusual move, Microsoft’s blog post states, “This decision was made based on an assessment of this situation, with the principle of protecting our customer ecosystem overall, firmly in mind.”

“Today our engineers added detection and protection against new malicious software known as Ransom:Win32.WannaCrypt,” a spokesperson said in a statement. “In March, we provided a security update which provides additional protections against this potential attack. Those who are running our free antivirus software or have Windows Update enabled, are protected.”

The new update is available here and those looking for more detailed information regarding WannaCrypt ransomware and how it may impact Windows can find it listed on the Microsoft security blog.

But even with the spread of the malicious software at least temporarily halted, researchers warned that another cyberattack could be imminent and the next one could target the United States.

“Currently the spreading of the ransomware is slowed down dramatically because a researcher found a logic bug in the malware, not because the companies around the world are having good security practice,” Matt Suiche, founder of Comae Technologies, a cybersecurity company in the United Arab Emirates.

Suiche said the cyberattackers could soon release a new update to the malware, making it more robust and resuming the global infection.

“I’d even say this update probably already happened,” he added.

Web articles – via partners/network co-ordinators. This website and its contents are the exclusive property of ANGA Media Corporation . We appreciate your feedback and respond to every request. Please fill in the form or send us email to: [email protected]
Previous: Ebola outbreak in DR congo, World Heath Organisations confirms
Next: Researchers find 37 million pieces of trash on Pacific island