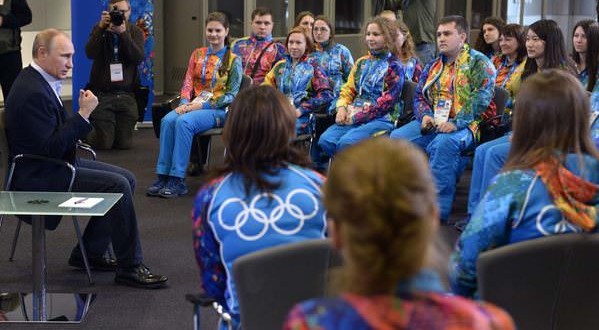 Vladimir Putin to Gays: ‘Leave the Children in Peace’

Russian President Vladimir Putin says gays should feel welcome at the upcoming Winter Olympic Games in Sochi, but they must “leave the children in peace”.

Mr Putin told volunteers today that gays visiting Sochi “can feel calm and at ease,” and vowed that there would be no discrimination at the games.

Putin also added that Russia was more liberal than some other countries, claiming that in certain US states homosexuality was still punishable by law.

“We are not forbidding anything and nobody is being grabbed off the street, and there is no punishment for such kinds of relations,” said Putin. “You can feel relaxed and calm [in Russia], but leave children alone please,” said Putin.

Web articles – via partners/network co-ordinators. This website and its contents are the exclusive property of ANGA Media Corporation . We appreciate your feedback and respond to every request. Please fill in the form or send us email to: [email protected]
Previous: Mystery Mars Rock Appears Near Opportunity Rover
Next: Actor Benedict Cumberbatch Almost Turned Down ‘Sherlock’