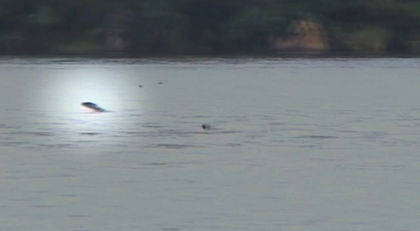 New images captured in a South African lake in the Mapungubwe National Park shows a tigerfish leaping out of the water and catching a swallow midflight. The video is the first record of a freshwater fish preying on birds in flight, according to a new study published in the Journal of Fish Biology.

In a study published in the January issue of the Journal of Fish Biology, researchers from the North-West University in Potchefstroom, South Africa, said during their time at the lake in the Mapungubwe National Park, they saw a fish jump to catch a bird successfully 20 times. The researchers were in the area to study migration and tiger fish habitats and just happened to see them eat the birds.

“The first reaction was one of pure joy, because we realized that we were spectators to something really incredible and unique,” researcher Nico Smit told the journal Nature.

Web articles – via partners/network co-ordinators. This website and its contents are the exclusive property of ANGA Media Corporation . We appreciate your feedback and respond to every request. Please fill in the form or send us email to: [email protected]
Previous: NFL : Walter Jones leads list of Hall of Fame finalists
Next: Razzie Awards : Salma Hayek And Sofia Vergara Nominated (Full List)