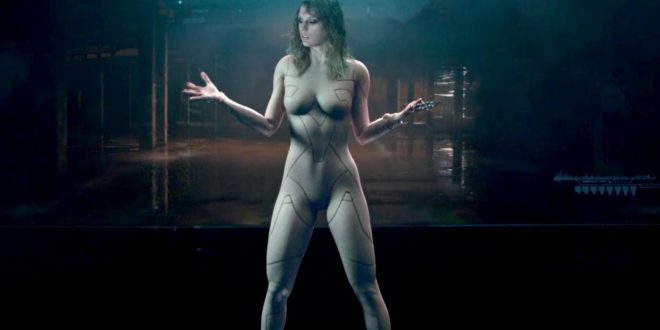 Taylor Swift has just dropped yet another incredible music video, but not everyone’s a fan of the vid for new track Ready For It.

We seriously don’t get why people have a problem, but apparently Taylor’s nude bodysuit is a big issue for some.

As always, Taylor was watching it all go down. And on Friday, after the world had had some time to digest the full video, she took to her Instagram Stories to brush off the comments and criticisms surrounding her bodysuit. She posted a selfie of her making a faux-concerned face and wearing the bodysuit during a break from filming the music video, with the caption, “It truly warms my heart that ppl had so much to say about this bodysuit 😂.” She also posted a mirror selfie showing her whole body in the suit, and another photo snapped by someone else that shows her bodysuit-clad profile.

Almost immediately after dropping the 15-second teaser video on Monday, the criticism of her body and apparent nudity began rolling in. Quick reminder: It’s nobody’s place, nor is it ever OK, to criticize people for their personal choices and physical appearances. There’s nothing shameful about nudity or being proud of your body. Fortunately, plenty of Taylor’s fans stood up for her online, pointing out to the haters that she was actually wearing a cyborg-esque bodysuit, and praising Taylor for her body positivity.

And speaking of the bodysuit: Since spotting it in the teasers, Swifties have wondered whether Taylor’s choice to wear the illusion-y suit is a reference to Kanye West’s “Famous” music video, which featured wax figures of several celebs — including Taylor — lying naked in a huge bed.

You’ll recall, of course, that Taylor and Kanye have an ongoing feud that peaked last year when Taylor disputed Kanye’s claim that he had her permission to include the lyric “I made that b*tch famous,” referring to T. Swift, in his song “Famous.” Since fans think she’s already referenced Kanye in another song from Reputation — see: the “tilted stage” lyric in “Look What You Made Me Do” — this might not be too far off of an assessment.

Web articles – via partners/network co-ordinators. This website and its contents are the exclusive property of ANGA Media Corporation . We appreciate your feedback and respond to every request. Please fill in the form or send us email to: [email protected]
Previous: Shock claim: Nibiru to bring apocalyptic earthquakes on Nov 19
Next: Ex-couple Selena Gomez and Justin Bieber spotted chilling