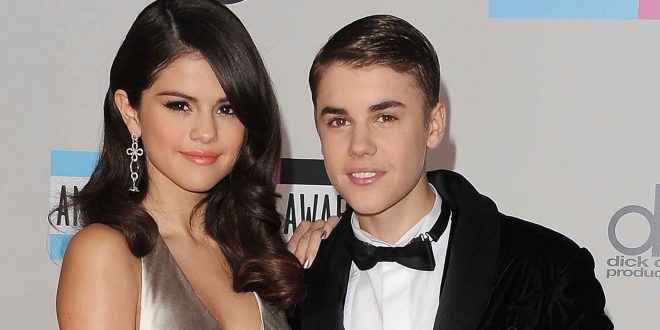 Selena Gomez and Justin Bieber grabbed breakfast together on Sunday morning (October 29) and there’s a photo of the former couple circulating on the Internet.

TMZ reported that on-again-off-again exes Justin Bieber and Selena Gomez have started hanging out again as just friends (Gomez is dating The Weeknd; Bieber is maybe casually dating actress Paola Paulin). The Weeknd, who’s away on tour, is reportedly fine with them spending time together.

They hadn’t been photographed together until this morning when Gomez and Bieber were spotted getting breakfast, just the two of them, at JOi Cafe in Westlake Village. TMZ has the photo of them sitting across the table, enjoying drinks. E! reports, via a source, they looked “friendly,” and that’s it.

Another source gave Us Weekly slightly more detail: “They grabbed breakfast, blueberry smoothies with whipped cream, and were just talking—none of the staff really recognized them. Justin paid for both of them, they looked to be in a good mood, they just sat at a table and chatted for a while, no hand holding or anything, the conversation seemed lighthearted. They sat at a table inside where they had a little more privacy. They stayed for about 25 minutes before leaving together.”

TMZ maintains, via sources, that The Weeknd is totally cool with the Bieber-Gomez friendship. But fans have noticed The Weeknd has also allegedly just unfollowed some of Gomez’s closest friends (including her mother, her assistant Theresa Mingus, and her best friend/kidney transplant donor Francia Raisa).

Web articles – via partners/network co-ordinators. This website and its contents are the exclusive property of ANGA Media Corporation . We appreciate your feedback and respond to every request. Please fill in the form or send us email to: [email protected]
Previous: Taylor Swift reponds to critism over nude bodysuit (Video)
Next: Astronomers confirm how black hole relativistic jets form