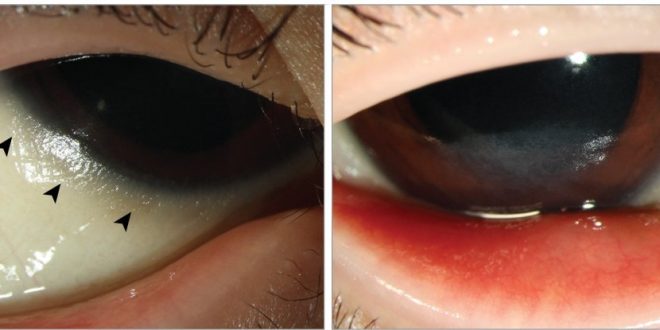 One boy’s vision problems and odd changes to his eyes turned out to be caused by a highly restrictive diet, according to a new report of the boy’s case from Canada.

According to a case report published October 2 in the JAMA Paediatrics, when the doctor examined the boy, the outer layers of the child’s eyes were very dry. This severe drought, can cause a buildup of material in the cornea (the transparent outer cover of the eye) called the Bitot spots.

He’d gone to the hospital after eight months of increasing problems. Dry eyes, night blindness, sensitivity to light and increasing vision loss, to the point of severity: by the time he visited The Hospital for Sick Children in Toronto, he could only see hand movements a maximum of 30 centimetres (12 inches) from his face.

The difficulty arose because he also suffered from eczema and multiple food allergies, which meant that his diet was highly restricted.

“Owing to concerns about food triggers of his eczema, the child had a restrictive diet consisting solely of potato, pork, lamb, apples, cucumber, and Cheerios,” the doctors wrote in their case report.

None of these food items are particularly high in vitamin A, which, as it turns out, is super important for your vision. The photoreceptor cells in your eyes rely on vitamin A to detect light, and the vitamin also keeps the cornea moist and protected.

The patient’s eyes were extremely dry, and had keratinised patches with a dry foamy appearance. These are called Bitot’s spots, and are a typical symptom of vitamin A deficiency.

“Vitamin A deficiency is generally thought of as a disease that primarily affects people in low resource environments, such as countries in the developing world, where food choices are limited and malnutrition is endemic,” the doctors wrote.

To treat the boy, the doctors administered three megadoses of vitamin A of 200,000 international units each. The first two were administered on the first two days after diagnosis respectively, and the third dose took place two weeks later.

After six weeks, the boy’s vision had improved to 20/800 in both eyes, and the dryness and Bitot’s spots had cleared up, as seen in the image above. However, 20/800 still fits into the legally blind category if it cannot be corrected to better than 20/200 with glasses or contact lenses.

And he may never fully heal.

“Vision loss associated with vitamin A deficiency can be reversible; however, in cases with established optic atrophy, as was the case in this patient, a degree of vision loss is likely permanent,” the doctors wrote.

“This patient illustrates the importance of considering micronutrient deficiencies in high-resource settings, particularly in persons for which a diet rich in various food sources is not evident, such as children with highly restrictive diets.”

Eye Benefits Of Vitamin A And Beta-Carotene

Because vitamin A helps protect the surface of the eye (cornea), it is essential for good vision.

Vitamin A eye drops also have been shown effective for the treatment of a specific type of eye inflammation called superior limbic keratoconjunctivitis.

Vitamin A, at least when in combination with other antioxidant vitamins, also appears to play a role in decreasing the risk of vision loss from macular degeneration (AMD). In the landmark Age-Related Eye Disease Study (AREDS) sponsored by the National Eye Institute, people with mild or moderate AMD who took a daily multivitamin that included vitamin A (as beta-carotene), vitamin C, vitamin E, zinc and copper had a 25 percent reduced risk of advanced AMD during a six-year period.

It also appears that a combination of vitamin A and lutein may prolong vision in people suffering from retinitis pigmentosa (RP). A four-year study conducted by researchers from Harvard Medical School and other prominent universities found that individuals with retinitis pigmentosa who took daily supplements of vitamin A (15,000 IU) and lutein (12 mg) had a slower loss of peripheral vision than those who did not take the combined supplements.

Web articles – via partners/network co-ordinators. This website and its contents are the exclusive property of ANGA Media Corporation . We appreciate your feedback and respond to every request. Please fill in the form or send us email to: [email protected]
Previous: Methane made lakes on Mars, says new research
Next: Indonesian Man survives fight with 23ft python (Photo)