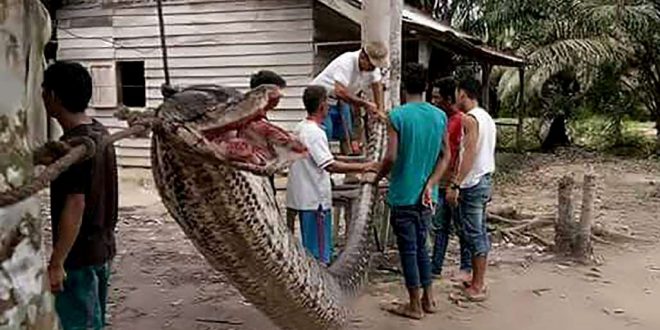 An Indonesian man is recovering in hospital after trying to capture a 26ft python with a sack.

Robert Nababan, a security guard known locally as a snake catcher, encountered the reptile as he was riding home from work on his motorcycle from a palm oil plantation in Riau province.

Although there were two other people trying to cross the same street, Robert was the only one who approached the snake.

The python ended up coiling around Robert and sinking its teeth deep into his left arm.

Robert was quickly rushed to an emergency room and had to undergo surgery.

“I tried to catch it. It bit my arm, and we wrestled for a while,” Robert told Indonesian TV reporters from his hospital bed.

Although the details of the rest the encounter are not clear, the massive snake was eventually killed and ended up hanging dead from two pillars in a yard. The reptile was later fried and eaten for dinner by hungry locals, according to Bangka Pos.

Pythons are a recurrent problem throughout the archipelago. On March 27, villagers on the island of Sulawesi went searching for a man who never returned from a palm oil fruit harvest. They eventually found pieces of fruit, a boot, a picking tool and a 23-foot-long python, the New York Post Reported. Upon slicing the python open, they realized that the slithering snake had eaten the body of 25-year-old farmer Akbar Salubiro.

Web articles – via partners/network co-ordinators. This website and its contents are the exclusive property of ANGA Media Corporation . We appreciate your feedback and respond to every request. Please fill in the form or send us email to: [email protected]
Previous: A Strict Diet of Lamb and Cheerios Leads to Boy’s Vision Loss
Next: US mom jailed for ignoring deal to vaccinate son, Report