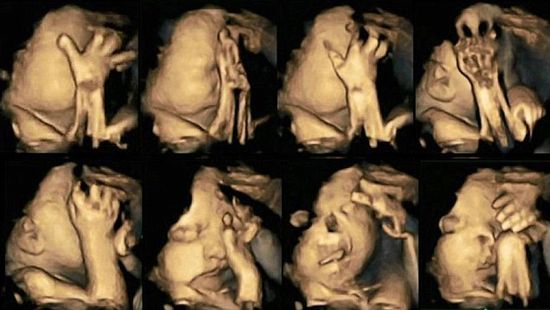 Smoking And Pregnancy : Ultrasound images reveal what smoking does to unborn babies

Smoking And Pregnancy : Ultrasound images reveal what smoking does to unborn babies

A new study appears to shed more light on the harmful effects of smoking while pregnant using 4D ultrasound scans to detect the tiny movements made by foetus in the womb.

Researchers at Lancaster and Durham universities said the findings of their pilot study added weight to existing evidence that smoking is harmful to fetuses as they develop in the womb and warranted further investigation.

Professor Brian Francis, of Lancaster University, said: “Technology means we can now see what was previously hidden, revealing how smoking affects the development of the fetus in ways we did not realise. This is yet further evidence of the negative effects of smoking in pregnancy.”

Observing 4-d ultrasound scans, the researchers found that fetuses whose mothers were smokers showed a significantly higher rate of mouth movements than the normal declining rate of movements expected in a fetus during pregnancy.

The researchers suggested that the reason for this might be that the fetal central nervous system, which controls movements in general and facial movements in particular did not develop at the same rate and in the same manner as in fetuses of mothers who did not smoke during pregnancy.

Previous studies have reported a delay in relation to speech processing abilities in infants exposed to smoking during pregnancy, the researchers added.

The researchers observed 80 4-d ultrasound scans of 20 fetuses, to assess subtle mouth and touch movements. Scans were taken at four different intervals between 24 and 36 weeks of pregnancy.

Four of the fetuses belonged to mothers who smoked an average of 14 cigarettes per day, while the remaining 16 fetuses were being carried by mothers who were non-smokers. All fetuses were clinically assessed and were healthy when born.

In common with other studies, the research also showed that maternal stress and depression have a significant impact on fetal movements, but that the increase in mouth and touch movements was even higher in babies whose mothers smoked.

The study also found some evidence of a bigger delay in the reduction of facial touching by fetuses whose mothers smoked, compared to the fetuses of non-smokers, but the researchers said this delay was less significant.

“A larger study is needed to confirm these results and to investigate specific effects, including the interaction of maternal stress and smoking.”

The researchers stressed that their research was a pilot study and that larger studies were needed to confirm and further understand the relationship between maternal smoking, stress, depression and fetal development.

They added that future studies should also take into account the smoking behaviours of fathers.

Web articles – via partners/network co-ordinators. This website and its contents are the exclusive property of ANGA Media Corporation . We appreciate your feedback and respond to every request. Please fill in the form or send us email to: [email protected]
Previous: Selena Gomez on Instagram: “Remembering how precious everyday is.”
Next: Elderly man’s death deemed a homicide, Police