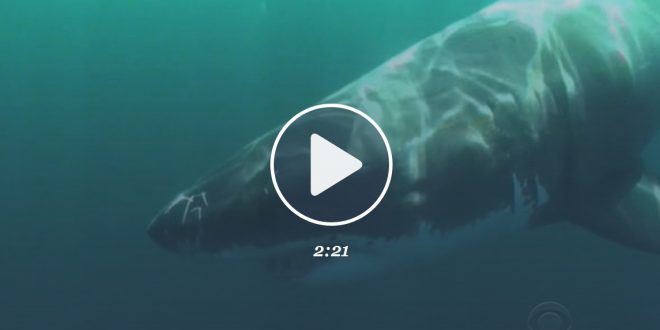 A father and son spear fishing trip took a turn for the worst after a visit from a great white shark.

Grigor Azatian, 25, was out in Stillwater Cover, California, with his father Armen, when the mammoth animal bit him several times on his leg.

Armen told KSBW: ‘He jumped into the boat, grabbed his speargun, went down and saw the great white. From his description it was about 15ft long. ‘Actually it was two or three bites, not just one. At that moment there was just shock for me. My thought was just to try and help him and stop the bleeding. ‘It’s so difficult for me to even imagine that. I would say a lot of people they would just faint.’

Grigor was suffering from huge blood loss. As Armen tended to his son, two off-duty sheriff’s deputies saw the commotion and rushed to help them.

A police spokesman said they were ‘in the right place at the right time’. One used a tourniquet to tighten up his leg and stop him from losing so much blood. Chunks of flesh had been torn from him, but the shark did not severe any major arteries. Grigor was airlifted to hospital where he is expected to make a full recovery.

Web articles – via partners/network co-ordinators. This website and its contents are the exclusive property of ANGA Media Corporation . We appreciate your feedback and respond to every request. Please fill in the form or send us email to: [email protected]
Previous: Stray Dog Rescues Woman From Mugger (Video)
Next: Model Ming Xi Falls During VS Fashion Show 2017 (Video)