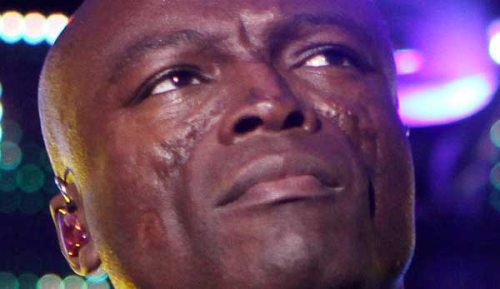 Although it isn’t a question fans would feel comfortable asking Seal face to face, it is a question that ponders the mind of many – How did Grammy winner Seal get scars on his face? Unfortunately the rumors have run rampant including the stories of a tribal ritual and cuts from a violent fight. The truth behind Seal’s facial scarring goes back to when Seal was very young and was diagnosed with lupus.

British-born Seal began his entertainment career when he was young. He joined his first band when he was only a teenager in the 80s. During his “Rolling Stone” interview with Rob Tannenbaum, Seal stated that he had “a rough childhood”. His parent divorced when he was still a baby and was raised by foster parents. Later he would be raised by his father. In another interview with “Q”, Seal referred to his father as a “bitter person”.

Seal Henry Olusegun Olumide Adeola Samuel or just “Seal” dealt with discoid lupus erythematosus (DLE) when he was younger but is now currently in remission. As a result, doctors removed muscle tissue from his face. DLE causes sores on the skin most often seen on the face, ears, and the head which can cause severe scarring. The lesions can also lead to permanent hair loss which many have speculated is also the reason Seal is bald.

The cause of DLE is not known but it may have hereditary factors which have not yet been fully discovered. The disease causes the body’s immune system to attack healthy, normal skin leading to the skin lesions. In some cases, exposure to the sun leads to outbreaks of the lesions and with prolonged exposure, the lesions have been known to cause scarring.

Discoid lupus erythematosus is somewhat more common in African Americans and typically first occurs between the ages of 20 to 40. It also has a higher occurrence in people that live in regions with high sun exposure. DLE is unmistakably a disfiguring disease that can lead to scarring of the affected areas as well as irreversible hair loss.

According to “SPIKE”, Seal discussed the scars during an interview for “Rolling Stone” magazine. The scars in which he received as a teenager caused him to become depressed but he stated “Now I really like them.” So while the world may have a fascination with Seal’s facial scars, undoubtedly the curiosity only adds to the mystique, charm, and attraction that millions of fans have with this talented singer.

Web articles – via partners/network co-ordinators. This website and its contents are the exclusive property of ANGA Media Corporation . We appreciate your feedback and respond to every request. Please fill in the form or send us email to: [email protected]
Previous: Childhood toys that are worth a fortune : TOP 10
Next: Arnon Milchan : ‘Pretty Woman’ producer reveals past as Israeli spy