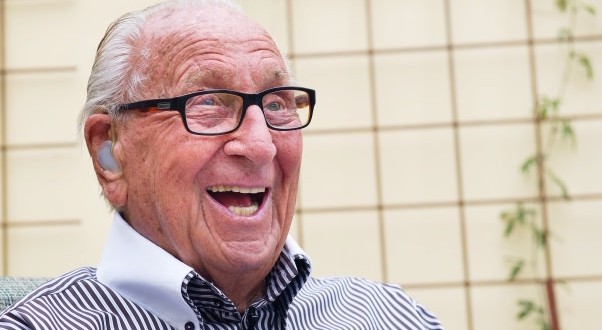 Researchers study 'super seniors' for clues to their longevity

Researchers study ‘super seniors’ for clues to their longevity

“I walk a mile every day. I think my love of music and travel, as well as the fun of leading the band and entertaining audiences keeps me healthy,” says Richards.

Richards is one of 500 super seniors taking part in a new research study to determine why some people live cancer-free into their 80s, 90s and beyond 100.

“Both my younger brother and sister died from cancer,” he says, “and I’m hopeful that this study will find clues into why people like me don’t get cancer.”

“It appears that some of these amazingly healthy super seniors, who are still active and busy at an advanced age, could be genetically protected from cancer-causing mutations,” says the study’s lead investigator Dr. Angela Brooks-Wilson of the BC Cancer Agency and Simon Fraser University. “There is also lots of evidence from other studies that lifestyle behaviours, such as not smoking, eating a balanced diet, cutting down on alcohol and getting regular exercise, play a huge role in not getting cancer.”

The super senior research project was named as the Canadian Cancer Society’s first Great Canadian Innovation Grant. Funding comes from a generous group of donors who responded to the Society’s appeal to raise $200,000 in one week to fund an innovation grant.

“We thought this would be an innovative way to engage Canadians directly in cancer research. We were overwhelmed with the support, and everyone who donated to make this grant possible can feel proud of the opportunity they are creating for the research community,” says Dr Siân Bevan, Director of Research at the Canadian Cancer Society. “The Great Canadian Innovation Grant is a reflection of the strength we have when we come together from coast to coast to support Canadians touched by cancer.”

“I would like to thank all the generous donors who make this research project possible. With their support, our goal is to provide more Canadians the chance to live longer, healthier lives” says Brooks-Wilson.

About the super seniors project

Brooks-Wilson and her team painstakingly gathered detailed information from 500 healthy people aged 85 to 109, mainly in the Vancouver area. The seniors provided medical, family and lifestyle information, as well as a blood sample, and were tested for physical and mental function. She and co-leader Dr. Denise Daley, of St. Paul’s Hospital and UBC, will compare the genes of the super seniors to those of more than 100,000 people, some who have cancer and some who don’t.

“We already know that many people who live to an incredibly healthy old age actually do have gene sequences that contribute to cancer in the general population, but for some reason they do not develop the disease. We suspect there is something that protects them from getting sick by overriding the cancer-causing genes,” says Brooks-Wilson.

The ultimate goal of this research is to identify possible genetic “override switches,” which could eventually lead to the development of anti-cancer drugs. It’s possible that such drugs, combined with a healthy lifestyle, could help other people to have a lower risk of getting cancer.

The study is accepting new super seniors from across Canada and internationally. If you are 85 or older and have never been diagnosed with cancer, cardiovascular disease or stroke, dementia, major lung disease or diabetes, we welcome you to participate in the research study. We also welcome anyone over 100, regardless of their health. Visit the Canadian Cancer Society’s website here for details.

Another super senior over 100

He’s 106, but Dr Robert Wiener isn’t ready to slow down. He’s on his exercise bike every day, and does 2 exercise classes a week, plus yoga and tai chi. A retired oral surgeon and the oldest resident in his Montreal retirement home, he says his secret to a long, healthy life is a combination of good genes and a healthy lifestyle. “Laughter is the best medicine,” he says. “Exercise a lot, eat properly and don’t stop at the pub too often.”

Web articles – via partners/network co-ordinators. This website and its contents are the exclusive property of ANGA Media Corporation . We appreciate your feedback and respond to every request. Please fill in the form or send us email to: [email protected]
Previous: Miranda Lambert : Singer in bathing suit for Little Red Wagon music video
Next: Tourist Killed By Whale : Canadian Jennifer Carren dies after whale jumps onto boat