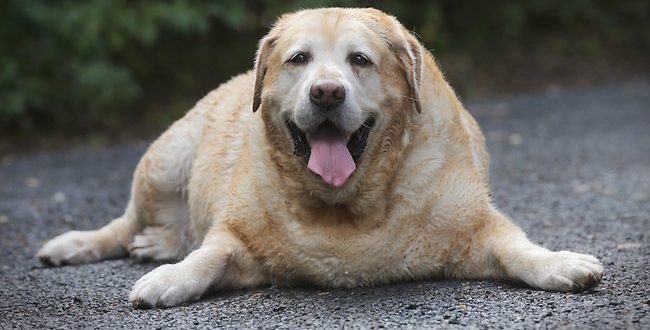 Labradors have a gene that makes them more likely to overeat than other breeds of dogs according to scientists at the University of Cambridge.

The study found that they are obsessed with food thanks to a faulty gene that makes it more difficult for them to recognise they’re full and control their appetite.

In developed countries, between one and two in three dogs (34-59%) is overweight, a condition associated with reduced lifespan, mobility problems, diabetes, cancer and heart disease, as it is in humans. In fact, the increase in levels of obesity in dogs mirrors that in humans, implicating factors such as reduced exercise and ready access to high calorie food factors. However, despite the fact that dog owners control their pets’ diet and exercise, some breeds of dog are more susceptible to obesity than others, suggesting the influence of genetic factors. Labradors are the most common breed of dog in the UK, USA and many other countries worldwide and the breed is known as being particularly obesity-prone.

In a study published today in the journal Cell Metabolism, an international team led by researchers at the Wellcome Trust-Medical Research Council Institute of Metabolic Science, University of Cambridge, report a study of 310 pet and assistance dog Labradors. Independent veterinary professionals weighed the dogs and assessed their body condition score, and the scientists searched for variants of three candidate obesity-related genes. The team also assessed ‘food motivation’ using a questionnaire in which owners reported their dog’s behavior related to food.

The researchers found that a variant of one gene in particular, known as POMC, was strongly associated with weight, obesity and appetite in Labradors and flat coat retrievers. Around one in four (23%) Labradors is thought to carry at least one copy of the variant. In both breeds, for each copy of the gene carried, the dog was on average 1.9kg heavier, an effect size particularly notable given the extent to which owners, rather than the dogs themselves, control the amount of food and exercise their dogs receive.

“This is a common genetic variant in Labradors and has a significant effect on those dogs that carry it, so it is likely that this helps explain why Labradors are more prone to being overweight in comparison to other breeds,” explains first author Dr Eleanor Raffan from the University of Cambridge. “However, it’s not a straightforward picture as the variant is even more common among flat coat retrievers, a breed not previously flagged as being prone to obesity.”

The gene affected is known to be important in regulating how the brain recognises hunger and the feeling of being full after a meal. “People who live with Labradors often say they are obsessed by food, and that would fit with what we know about this genetic change,” says Dr Raffan.

Senior co-author Dr Giles Yeo adds: “Labradors make particularly successful working and pet dogs because they are loyal, intelligent and eager to please, but importantly, they are also relatively easy to train. Food is often used as a reward during training, and carrying this variant may make dogs more motivated to work for a titbit.

“But it’s a double-edged sword – carrying the variant may make them more trainable, but it also makes them susceptible to obesity. This is something owners will need to be aware of so they can actively manage their dog’s weight.”

The researchers believe that a better understanding of the mechanisms behind the POMC gene, which is also found in humans, might have implications for the health of both Labradors and human.

Professor Stephen O’Rahilly, Co-Director of the Wellcome Trust-Medical Research Council Institute of Metabolic Science, says: “Common genetic variants affecting the POMC gene are associated with human body weight and there are even some rare obese people who lack a very similar part of the POMC gene to the one that is missing in the dogs. So further research in these obese Labradors may not only help the wellbeing of companion animals but also have important lessons for human health.”

Web articles – via partners/network co-ordinators. This website and its contents are the exclusive property of ANGA Media Corporation . We appreciate your feedback and respond to every request. Please fill in the form or send us email to: [email protected]
Previous: Kenyan Baby girl rescued three days after building collapsed
Next: Yuyun: 14-year-old raped by 14 men was top student