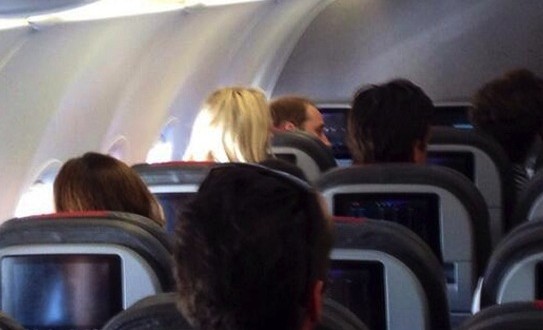 The 31-year-old British Royal rode coach on a flight from Memphis to Dallas, prompting praise from fellow passengers who called him “humble.”

A man resembling the young royal boarded an American Airlines flight on Sunday. He took the window seat and ordered a water — but not before he was spotted by a local TV news reporter, who snapped his photo and posted it on Twitter.

According to a report, William flew in economy class to save money.
The princes are generally accompanied round-the-clock by a team of approximately four taxpayer-funded officers.

According to the Daily Mail, one senior industry source estimated the cost of guarding the princes during their five-day trip would be in the region of $84,000, including business class flights and hotels for all of the officers.

Prince William reportedly changed planes at Dallas Fort Worth to return to the UK.

When on official duties, the princes travel in first or business class along with their entourage.

Web articles – via partners/network co-ordinators. This website and its contents are the exclusive property of ANGA Media Corporation . We appreciate your feedback and respond to every request. Please fill in the form or send us email to: [email protected]
Previous: Magnetic Fingerprint of Galaxy Revealed (Photo)
Next: Lara Logan’s Future With CBS Uncertain