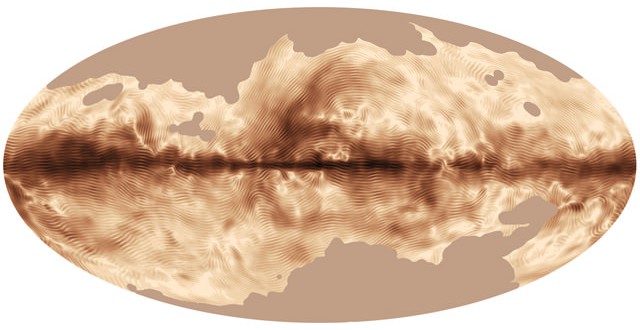 Posted by: News May 7, 2014 in Press Releases, Science Leave a comment

A team of astrophysicists have created a unique map of the sky that shows the magnetic field shaping the Milky Way galaxy, using data from the Planck Space Telescope. The image will help open doors to understanding the birth of the universe.

Light is a very familiar form of energy and yet some of its properties are all but hidden to everyday human experience. One of these – polarisation – carries a wealth of information about what happened along a light ray’s path, and can be exploited by astronomers.

Light can be described as a series of waves of electric and magnetic fields that vibrate in directions that are at right angles to each other and to their direction of travel.

Usually, these fields can vibrate at all orientations. However, if they happen to vibrate preferentially in certain directions, we say the light is ‘polarised’. This can happen, for example, when light bounces off a reflective surface like a mirror or the sea. Special filters can be used to absorb this polarised light, which is how polarised sunglasses eliminate glare.

In space, the light emitted by stars, gas and dust can also be polarised in various ways. By measuring the amount of polarisation in this light, astronomers can study the physical processes that caused the polarisation.

In particular, polarisation may reveal the existence and properties of magnetic fields in the medium light has travelled through.

The map presented here was obtained using detectors on Planck that acted as the astronomical equivalent of polarised sunglasses. Swirls, loops and arches in this new image trace the structure of the magnetic field in our home galaxy, the Milky Way.

In addition to its hundreds of billions of stars, our Galaxy is filled with a mixture of gas and dust, the raw material from which stars are born. Even though the tiny dust grains are very cold, they do emit light but at very long wavelengths – from the infrared to the microwave domain. If the grains are not symmetrical, more of that light comes out vibrating parallel to the longest axis of the grain, making the light polarised.

If the orientations of a whole cloud of dust grains were random, no net polarisation would be seen. However, cosmic dust grains are almost always spinning rapidly, tens of millions of times per second, due to collisions with photons and rapidly moving atoms.

Then, because interstellar clouds in the Milky Way are threaded by magnetic fields, the spinning dust grains become aligned preferentially with their long axis perpendicular to the direction of the magnetic field. As a result, there is a net polarisation in the emitted light, which can then be measured.

Web articles – via partners/network co-ordinators. This website and its contents are the exclusive property of ANGA Media Corporation . We appreciate your feedback and respond to every request. Please fill in the form or send us email to: [email protected]
Previous: MacBook Air 2014: More Battery, Less Cash
Next: Prince William flies coach – and there’s proof (Photo)