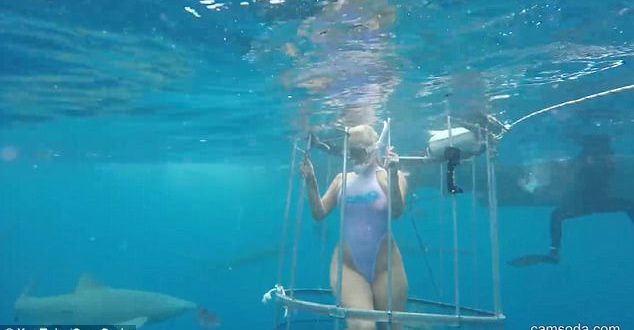 Molly Cavalli had just been lowered into the water in a protective cage, which proved to be ineffective, when the lemon shark attempted to savage the model’s ankle.

The delights of the shoot, which took place just off the Florida coast, were soon replaced by agonising screams as she realised what was happening.

Moments later, the cage is surrounded by blood as Ms Cavalli is pulled from the water gasping for air, before the footage focuses on the gash in her leg.

The shoot, which was meant to showcase a new mobile broadcasting feature, was abandoned and the model was rushed to hospital for treatment.

She later issued a statement thanking fans for their wishes, and playing down the severity of her injuries.

She said: “I want to thank my fans for their outpouring of support as I heal my foot following the shark bite. Luckily it only required 20 stitches. I’m fine. It’s not that bad. I had a great experience anyway and now I have a story to tell forever.”

Darren Press, Vice President of CamSoda, the adult entertainment company who Ms Cavalli was representing, explained that the model’s foot was dangling out of the protective cage, allowing the shark to nab at her.

He said: “From what we gathered, lemon sharks are predominantly docile and relatively harmless.

“During the broadcast, a shark approached the cage which made Molly nervous. She swam up to the surface as the shark approached. Her foot rose above the protective net and was bitten.

“We immediately pulled Molly out of the cage and rushed to shore.”

2016 had a record number of shark attacks and bites (107) which surpassed the previous record of ninety-eight set in 2015 by nine. However, the total number of fatalities is down from nine worldwide in 2015 to eight in 2016.*

While the number may sound scary, it’s not time to cue the “Jaws” theme song. Record temperatures made the ocean more appealing, while cheaper oil prices made traveling to the beach more affordable.

The 2016 leader for shark bites was the sunshine state of Florida with a total of 34 bites. Thirteen bites happened in the New Smyrna Beach vicinity, a region known as the shark bite capital of the world. The area is a hotbed for surfers, bait fish and sharks.

Web articles – via partners/network co-ordinators. This website and its contents are the exclusive property of ANGA Media Corporation . We appreciate your feedback and respond to every request. Please fill in the form or send us email to: [email protected]
Previous: Alarming decrease in oceans’ dissolved oxygen level, A New Study Reveals
Next: Blizzard reveals Overwatch loot box drop rates in China, Reports