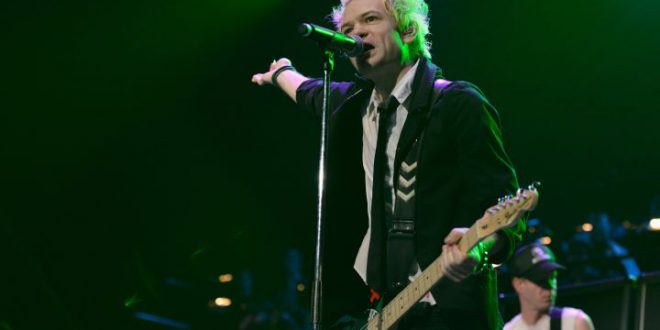 Sum 41 are back and running from the internet in their new video for “Fake My Own Death.” The song serves as the lead single for their upcoming album 13 Voices, which will be released on Oct. 7 on Hopeless Records.

Their new track ‘Fake My Own Death’ tries to play catch up and place the noughties pop rockers into a modern age of the internet and viral memes.

The internet turns over pretty bloody fast, but putting Nyancat, Miley Cyrus’ wrecking ball, and other years-old pop culture references in there just makes their kooky internet music video look even more aged than they are. Like, even Kim Kardashian’s ‘Break the Internet’ PAPER Mag cover was nearly two years ago, yo. Keep up, Derek Whibley.

And, the song obviously just complains that pop culture is bad and they are much too mature and intelligent to find the entertainment industry or online content of any worth. Because that’s what Heightened Intellectual People™ do, they ignore all modern timestamps. Obviously.

Web articles – via partners/network co-ordinators. This website and its contents are the exclusive property of ANGA Media Corporation . We appreciate your feedback and respond to every request. Please fill in the form or send us email to: [email protected]
Previous: Researchers Find Tiny Pieces of Opal in Meteorite
Next: Tom Hanks Stars In First Trailer For Clint Eastwood’s Sully (Watch)