Home » World » Picking your nose may be healthy for you, According to Study 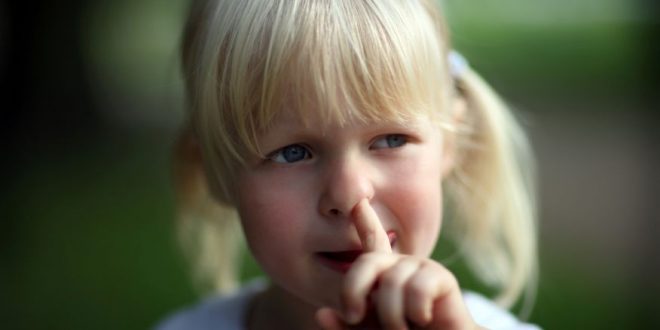 New study has revealed eating bogies may be good for your health.

Researchers and multiple universities including Harvard and MIT recommend that parents should not discourage children from nose-picking. The study shows that ingesting the snot could be good for your teeth and overall health, being packed with good bacteria.

The research, published in the journal of Applied and Environmental Microbiology says that mucus can help prevent bad bacteria from sticking to teeth and could also help defend against respiratory infections, stomach ulcers and other diseases.

Researchers are even working on a synthetic mucus toothpaste and chewing gum to harness the benefits without actually having to dig in.

“Nature pushes us to do different things because it is to our advantage to have certain behaviors, to consume different types of foods,” study co-author Dr. Scott Napper, professor of biochemistry at the University of Saskatchewan, told the U.K. Telegraph. “So maybe when you have an urge to pick your nose and eat it, you should just go with nature.”

An Austrian lung specialist, professor Friedrich Bischinger, who also contributed to the study, said people who pick their noses are healthier, happier and probably better in tune with their bodies.

“Eating the dry remains of what you pull out (of your nose) is a great way of strengthening the body’s immune system,” he said, according to the Telegraph. “Medically, it makes great sense and is a perfectly natural thing to do. In terms of the immune system, the nose is a filter in which a great deal of bacteria are collected. And when this mixture arrives in the intestines it works just like a medicine.”

Web articles – via partners/network co-ordinators. This website and its contents are the exclusive property of ANGA Media Corporation . We appreciate your feedback and respond to every request. Please fill in the form or send us email to: [email protected]
Previous: Stephen Hawking: Humans Must Leave Earth Within 100 Years to Ensure Survival
Next: Marijuana may be able to improve memory, A New Study Reveals