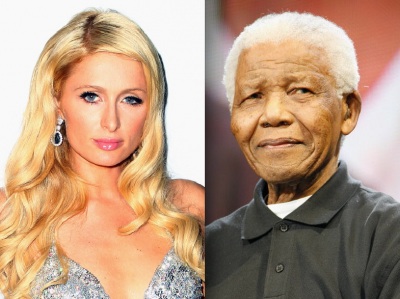 Paris Hilton says sh is disgusted with writers of “that stupid fake tweet”. Soon after news broke of the death of Nelson Mandela a tweet allegedly written by Paris emerged on Twitter account @DeletedTweets.

Sure enough, a supposed Tweet in which Hilton allegedly credited Mandela with the “I Have a Dream” speech was quickly exposed as a fake.

Shortly after the inaccuracy was confirmed, “Deleted Tweets,” the account responsible for the hoax, was poetically deleted.

Unwilling to let common sense serve as her only vindication, however, Paris Hilton officially responded to the story–and then posted an actual Twitter tribute to Mandela.

“I just landed off an airplane & heard the news. I never wrote that tweet, it is a fake. Obviously I know that speech was by MLK,” wrote Hilton. “Whoever made that stupid fake tweet lacks respect to the loss the world is mourning right now. Same goes for all the blogs who ran with it.

“Just landed & heard the sad new (sic) about Nelson Mandela. He was a true Hero & the world is a better place because of him. May he rest in peace.”

Web articles – via partners/network co-ordinators. This website and its contents are the exclusive property of ANGA Media Corporation . We appreciate your feedback and respond to every request. Please fill in the form or send us email to: [email protected]
Previous: Nelson Mandela dies aged 95
Next: Paul Walker’s Engagement Ring Gift : The Couple Opens Up (VIDEO)