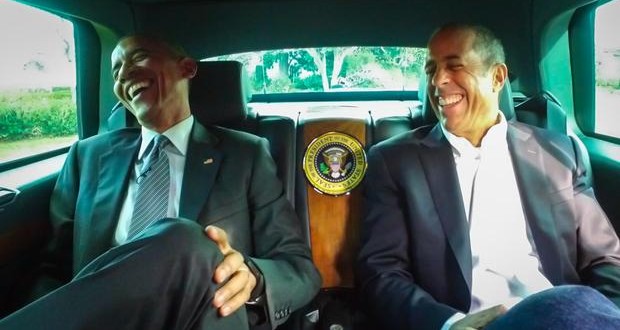 Obama joins Seinfeld on 'Comedians in Cars Getting Coffee' (Video)

Obama joins Seinfeld on ‘Comedians in Cars Getting Coffee’ (Video)

Obama is neither a comedian nor, by most accounts, a car fanatic. But he’ll nonetheless make an appearance on Jerry Seinfeld’s “Comedians in Cars Getting Coffee” when the web series premieres later this month.

In the episode, President Obama and Seinfeld drive a 1963 Corvette Stingray Split Window Coupe on the White House complex. The two reportedly talk it up and share some laughs about life in the White House, naturally, over a cup of joe.

“Growing up in the ’60s my kid dream was always to be an astronaut—doing a comedy show with President Obama in and around the White House felt like going into space,” Seinfeld said in a statement. “‘How did I get here?’ ‘Is this really happening?’ The President’s humor and generosity are the only reasons this was even possible.”

The President’s episode premiers Dec. 30 at 11:30p.m. ET on Comediansincarsgettingcoffee.com and the streaming network Crackle. Other season 7 guests include Steve Martin, Will Ferrell, and Kathleen Madigan.

Web articles – via partners/network co-ordinators. This website and its contents are the exclusive property of ANGA Media Corporation . We appreciate your feedback and respond to every request. Please fill in the form or send us email to: [email protected]
Previous: Canadian Soldier responsible for wife’s murder in Toronto highrise fall, Police
Next: Ottawa Man nabbed for speeding, impaired driving