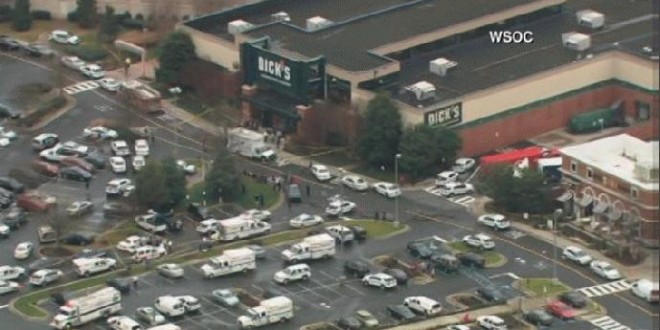 An armed man was shot and killed by an off-duty officer at Northlake Mall on Christmas Eve, according to Charlotte-Mecklenburg police.

The incident happened about 2 p.m. Thursday.

The shooting was not a random act but rather the result of a feud among people who knew each other, Chief Kerr Putney of the Charlotte-Mecklenburg Police Department said. There was no evidence the shooting was gang-related, he said.

A store manager at the mall said she watched as a group of people “ganged up” on a man before the shooting occurred.

Officers responded to the dispute, and an armed subject was shot by an officer during the altercation, NBC reported. The person, identified as 18-year-old Daquan Antonio Westbrook, was pronounced dead at the scene.

Jake Wallace of Boone was in Dick’s Sporting Goods when shots rang out nearby — about 30 feet outside the store, near Journey’s shoe store on the lower level, according to police.

“You don’t think gunshots,” Wallace told the Associated Press. “But then I heard a rapid fire. Once hearing that, there was no mistaking it. It sounded like someone was unloading a clip.”

A shopper at a Bebe store on the upper level of the mall told CNN the stores were extremely crowded. Lauren Malone was with her sister and mother in the store when she heard a “boom, boom, boom.”

Employees at a number of businesses locked the doors and escorted shoppers out the back door.

Putney said Officer Thomas Ferguson was working off-duty at the mall when he heard the shots and confronted the man who pointed a gun in his direction.

The officer then fired his service weapon, Putney said. Westbrook was given emergency aid, but medics pronounced him dead shortly afterward, officials said.

All ramps to and from Harris Boulevard to Interstate 77 were closed as police investigated.

“The good thing about this case is that there are a lot of witnesses,” Putney said.

Web articles – via partners/network co-ordinators. This website and its contents are the exclusive property of ANGA Media Corporation . We appreciate your feedback and respond to every request. Please fill in the form or send us email to: [email protected]
Previous: Dalene Bowden: Idaho cafeteria worker fired for giving free lunch to hungry child
Next: 1300 kgs of hashish seized in Port of Montreal