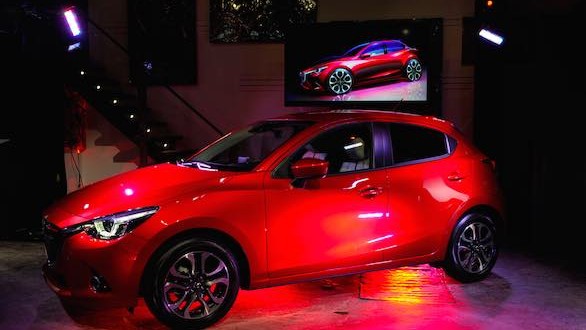 On the eve of the Montréal International Auto Show, the official kick-off of the Canadian auto show season, Mazda unveiled the all-new subcompact Mazda2 for the first time in North America.

The completely redesigned Mazda2 is the fourth model in Mazda’s line-up of new-generation vehicles that feature the company’s SKYACTIV Technology and KODO – Soul of Motion design.

“When we launched the first generation Mazda2 right here in Montréal, we did so because Québec has been known to embrace the small car philosophy with greater verve than the rest of Canada. Well, the sales proved us right, which is why we’re back here again, this time to introduce the remarkable new second generation Mazda2,” said Kory Koreeda, President, Mazda Canada. “This car proves that small car doesn’t mean small value or small fun and in fact, with all the value that SKYACTIV Technology and KODO design brings to this segment, we expect big things from this small but mighty new Mazda2.”

The province of Québec is known to be a market that embraces small vehicles.

Mazda said in North America, the 2016 Mazda2 will be powered exclusively by a SKYACTIV-G 1.5-liter gasoline engine that is more powerful and up to 20 percent more fuel efficient than the outgoing Mazda2.

Output details and full specifications will be revealed at a later date, closer to launch.

The Mazda2 will be on display throughout the run of the 2015 Montréal International Auto Show, along with the 2016 Mazda CX-3, Mazda6 and CX-5 which also makes their Canadian debuts at the show.

Web articles – via partners/network co-ordinators. This website and its contents are the exclusive property of ANGA Media Corporation . We appreciate your feedback and respond to every request. Please fill in the form or send us email to: [email protected]
Previous: Cameras kept busy snapping speeders in Saskatchewan
Next: Sleeping for More Than 30 Minutes May Boost Infants’ Memory, Study Shows