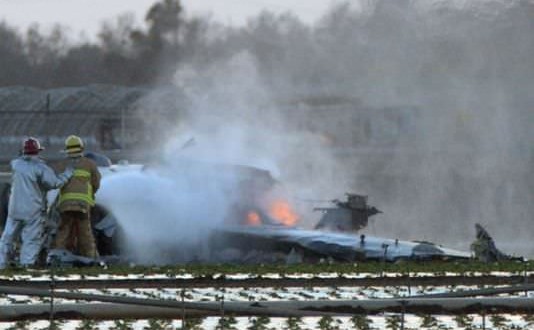 Federal aviation investigators were at the scene Wednesday night of the fiery crash of a fighter jet during a training mission near Point Mugu Naval Air Station that killed the pilot.

The jet came down around 5:13 p.m. in an agricultural field near Hueneme Road at Highway 1, according to the Ventura County Fire Department.

The pilot, the only person aboard, was pronounced dead at the scene, said Ventura County fire Capt. Mike Lindbery. The pilot’s identity was not immediately known.

Nobody on the ground was hurt.

“Fortunately nobody was in that portion of the field,” Lindbery said Wednesday night.

Naval Station Ventura County Public Affairs Officer Kimberly Gearhart said the plane had just finished playing the role of an enemy aircraft in an offshore training exercise and was preparing to land when it went down near Pacific Coast Highway.

She said it was unclear whether the pilot reported any problems before the crash about 65 miles northwest of Los Angeles.

The Hawker Hunter is a single-seat fighter-ground attack plane. Originally designed in the 1950s, more than 2,000 were produced. ATAC describes it as “one of the classic fighter designs of all time.”

In May 2012, another Hawker Hunter crashed into a farm field near the Navy base, killing the 57-year-old pilot. That plane had also been contracted to play the enemy in training exercises.

In May 2011, three members aboard a Boeing 707 tanker loaded with jet fuel escaped with only minor injuries when their aircraft skidded off the runway while taking off from the base and exploded into flames. That plane was carrying civilians and had a contract to provide fuel transport.

Web articles – via partners/network co-ordinators. This website and its contents are the exclusive property of ANGA Media Corporation . We appreciate your feedback and respond to every request. Please fill in the form or send us email to: [email protected]
Previous: LeBron James, wife welcome baby girl Zhuri to family
Next: Toronto Police Probe Ex-CBC Host Jian Ghomeshi in Sex Assault Case