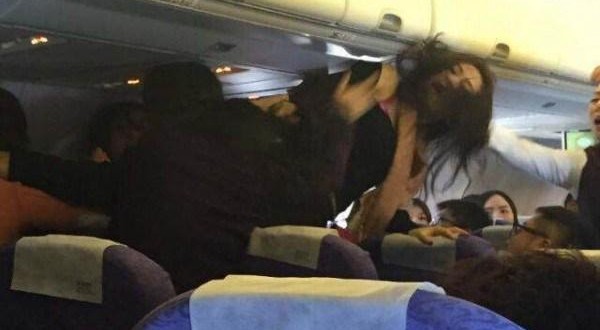 The trouble aboard Flight 433 from Chongqing to Hong Kong all started when two women seated in from of 27-year-old Chan Juan Sung thought her baby was crying too loudly and she wasn’t doing enough to stop it.

The pair began to tell the baby’s mother to ‘shut her child up’ but she didn’t react too kindly to the comments, according to Chinese media.

Passenger Xiong Wan, 45, said: “I was sitting right next to them when they started telling the woman to shut the baby up.

“She started shouting back at them and before I knew what was happening she leant over the seat and punched one of them.

“They then started hitting her and all hell broke loose.

“They were fighting, the baby was now screaming and other passengers were shouting.

The brawling women were eventually separated by the Air China cabin crew and taken in for questioning when the flight reached the eastern city of Hong Kong.

Daio Weimin, a spokesman for the airline, said: “Passengers cannot behave like this.

“Each and everyone must adhere to aviation laws to ensure a safe and comfortable flight for all.”

The incident comes just days after a passenger making his first trip by plane caused chaos at the airport after opening the emergency door in his eagerness to get out.

Hu Hsieh, 43, had booked the ticket to travel back to visit his family in the city of Sanya in the southern Chinese province of Hainan.

But on touchdown he wanted to ‘get some fresh air’ so grabbed hold of the handle for the emergency door – and wrenched it open.

In public service announcements even President Xi Jinping himself reminded citizens in China to improve their behaviour whilst travelling.

Web articles – via partners/network co-ordinators. This website and its contents are the exclusive property of ANGA Media Corporation . We appreciate your feedback and respond to every request. Please fill in the form or send us email to: [email protected]
Previous: FedEx Truck Accident – Video: FedEx Truck Crashes In Georgia, Spilling Packages On Highway
Next: Eight Children Found Stabbed to Death in Australia