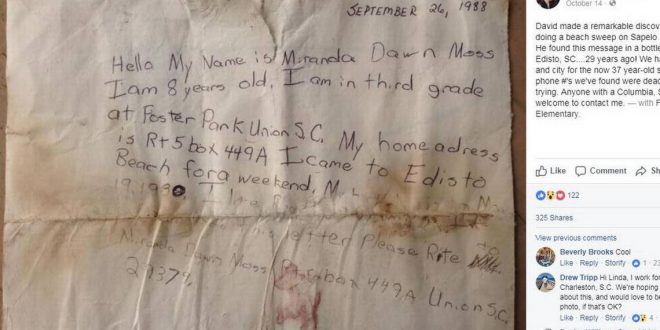 Georgia Woman Finds on Facebook the Message She Threw in a Bottle 29 Years Ago.

Before this week, Miranda Moss Chavez never knew what happened to the message in a bottle she threw out to sea off Edisto Beach, S.C., as an 8-year-old kid on vacation in 1988.

Hurricane Hugo hammered the South Carolina coast less than a year after she threw it, so she lost hope.

Then this past weekend, Chavez received a Facebook message from a stranger. Linda Humphries and her husband, David, found the 29-year-old letter stuffed in a plastic bottle while cleaning up the beach on Saturday on Sapelo Island, Ga., just a month after Hurricane Irma rocked the region. The letter landed roughly 90 miles away after all those years.

“I don’t believe this could have landed in better hands,” Chavez told McClatchy.

In a Facebook post, Humphries said it was a “remarkable discovery” when they noticed the letter was from 1988. So they decided to track down the letter’s owner with the address and name listed. Chavez lived in Union, S.C., at the time she wrote the message.

After having no luck, she posted the letter along with Chavez’s information and asked for help tracking her down. Within hours, the post was shared more than 100 times and Humphries had made contact with Chavez.

“I was shocked, it couldn’t come at a better time,” Chavez said.

Chavez said she was with her three kids at the time and her family has been going through some hard times. The letter popping up on her Facebook feed took her back to a simpler time and reminded her of the kindness in the world.

Chavez plans on meeting the Humphries in person.

“It really does confirm the whole six degrees of separation theory,” she said. “I believe everything happens for a reason.”

Web articles – via partners/network co-ordinators. This website and its contents are the exclusive property of ANGA Media Corporation . We appreciate your feedback and respond to every request. Please fill in the form or send us email to: [email protected]
Previous: Researchers May Have Found Out What Causes Dyslexia
Next: Officers fired after United Airlines incident