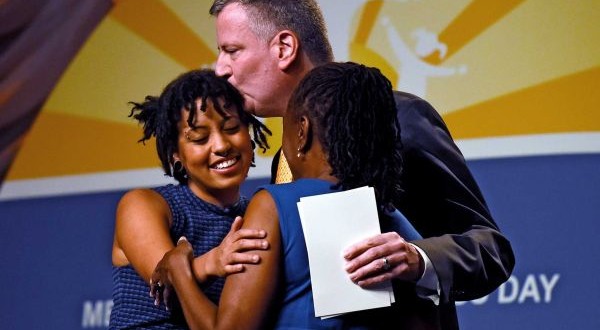 Chiara de Blasio’s struggles with addiction and depression came to a head last spring — in the midst of her father’s mayoral campaign — and her ability to speak about them now as a sober and healthy young woman is “nothing other than a miracle,” she said Tuesday..

“My current daily routine begins with waking up anxious, my chest pinched tight as I try to shake the sleep off of my heavy eyelids,” she writes. “The first moments of my day remind me where I came from, as every twenty four hours, I am brought back to the eighteen years that preceded this one. It is remarkable how I’ve learned to change my natural state, as every morning I awaken a nervous and depressed wreck, before slowly putting myself back together again.”

She describes the ways in which she attempts to deal with her illness on a daily basis.

“I have learned healthy ways to make myself feel better. I meditate. I exercise. I make myself get out of bed even when I really, really don’t want to, and it always pays off. I cry when I need to cry. When someone asks me how I’m doing, even as a rhetorical and superficial greeting, I tell them the truth. I write poems.”

Chiara had her problems publicized before, both my media and by her own family in a video they released last December. “Getting sober is always a positive thing and by no means is it easy, it’s the hardest thing I’ve ever done, but it’s so worth it,” she said in the video. Since then been avoid doing recaps, living what to all appearances appeared the normal life of a young and mildly-famous New York teenager with a vintage shopping addiction and a penchant for witch hats.

“ The problems that I have aren’t ones that fix themselves,” she writes. “But as I always say, the most beautiful things come out of pain. And so long as I’m trying to create a beautiful life, I’m in a better place than I was before.”

Last week Chiara was selected by the U.S. Department of Health and Human Services as a recipient of an award honoring role models for young people battling substance abuse and mental health issues.

Web articles – via partners/network co-ordinators. This website and its contents are the exclusive property of ANGA Media Corporation . We appreciate your feedback and respond to every request. Please fill in the form or send us email to: [email protected]
Previous: Space : Boise state students talk live to astronauts
Next: New bird flu detected in Antarctica, Study